To hug or not to hug: A five-step guide to embracing at work 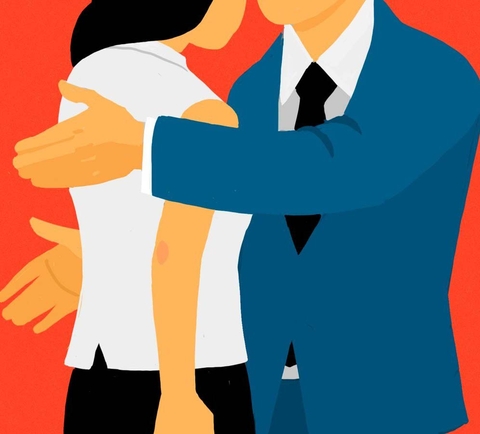 To hug or not to hug at work. Illustration by Ian Berry/CNN.

New jobs and promotions, baby and marriages news, a colleague who's moving out of the country. Should you go in for an embrace at work, even if the situation warrants it?

In the era of #MeToo, employers and workers are paying more attention to their actions in the workplace.

"In 2019, there are certain things -- including physical acts like hugging -- that we shouldn't be doing any more," said Mike Schmidt, an employment attorney at Cozen O'Connor law firm in New York City. "It's just not worth the risk."

But people have different comfort levels when it comes to touching. Some are natural huggers, while others might barely hug their loved ones and don't want to be touched by anyone at the office.

Different industries and workplaces have different cultures when it comes to hugging.

She said that, in general, more conservative industries like finance or banking don't have a lot of hugging in the office, while industries like service or hospitality tend to be more open to touching.

Where you work can also play a role.

"In New York City and Boston there isn't as much hugging as you would see in Southern California," Smith said.

Keep the power dynamic in mind

A person in a position of power should avoid giving out hugs.

Asking if it's OK to give a hug also doesn't alleviate any pressure.

"It's likely they aren't going to be comfortable saying, 'no, you can't hug me,'" said Schmidt.

Hugs between two colleagues on the same level tend to be more acceptable if the appropriate cues are present.

"If one person doesn't have any sway over the other's career, doesn't sign a paycheck or bonus, and you are involved in each others' lives, you can give hugs," said Smith.

If you are debating whether or not to go in for a hug, look for clues that the recipient is open to it.

Avoiding eye contact or looking threatening -- as if warning not to get closer -- can signal that the person doesn't want to embrace, said Dudley.

So can looking down or stiffening one's shoulders.

"If the person's body is very closed into itself and arms are by their side and shoulders are a little raised, they might not welcome a hug," said Smith.

Set your own expectations

If you aren't a hugger and are worried someone isn't sure how to greet you, stick your hand out right away to make it clear that a handshake is preferred, said Karen Elliott, a labor and employment attorney with Eckert Seamans.

"I ran into someone I knew fairly well and I could tell he was wondering if he should go in for a hug. I could see the confusion and I immediately stuck out my hand ... I could see the relief," Elliott said.

Other ways to show warmth

There are other ways to show camaraderie and appreciation in the workplace.

You can try a variation of a hug and a handshake, by offering a regular handshake and then putting your other hand on top of the recipient's hand to cover it, suggested Smith.

"You can also try standing next to them and putting an arm on their shoulders and giving a little squeeze -- then you don't have the chest to chest thing."