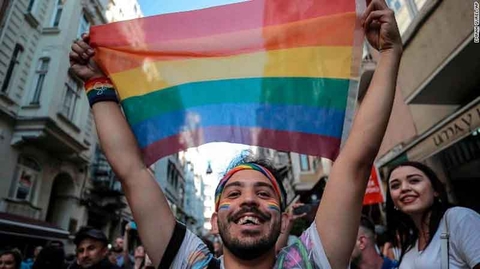 Hundreds of people defied a Turkish government ban to take part in a Pride Parade in Istanbul on Sunday before being dispersed by police.

Campaigners from the gay and transgender communities gathered in the city's main Taksim Square, brandishing rainbow flags, singing, dancing and giving speeches for around 40 minutes before police cleared the area.

There were reports of tear gas being used on some marchers, according to Amnesty Turkey. The human-rights group added that several people were detained at the event.

It's the fourth year in a row that authorities have banned the Lesbian Gay Bisexual Transgender Intersex (LGBTI) march, which in previous years had drawn crowds in the tens of thousands.

Indeed the last time the pride parade was allowed, in 2014, an estimated 90,000 people marched through the city center, according to Amnesty International.

The vast crowd was in stark contrast to the following year when the march was banned for the first time, seen by some as the beginning of a recent crackdown on civil liberties in Turkey.

Just a few hundred people took part in the 2015 march, which authorities banned because it coincided with the holy Muslim month of Ramadan.

Similarly, parades in 2016 and 2017 were also banned for taking place during Ramadan, with authorities citing security concerns from ultraconservative Islamist groups.

Organizers had hoped this year's event -- which was held after Ramadan -- would therefore be allowed. Ramadan or not, Turkish authorities still refused to allow the march.

For critics of newly reelected President Recep Tayyip Erdogan, it is another indication of his hardline approach, which has come under criticism from the West in recent years.

Although homosexuality has been legal in Turkey since 1923, the country has one of the worst records of human-rights violations against LGBTI+ people in Europe, and Turkey's LGBTI+ community has been increasingly vocal about violence against its members.