I thought my bigotry was morally right 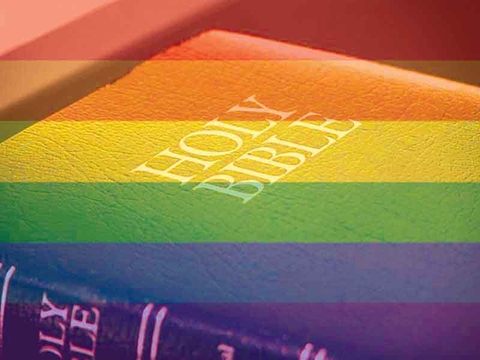 I am now a proud member and ally of the community I tried to hate.

It was a blazing afternoon under the Texas sun when I saw my first gay pride parade. I and my friends bubbled over with excitement as we parked. None of us had been to a pride parade but we were young and hungry for new experiences. We grabbed bottles of water, our seats and walked to an intersection near the end of the parade.

We arrived behind a crowd cheering at a float brimming with muscular dudes who were almost brimming out of their tighty-whiteys.

Rainbows covered everything: hats, clothes, and even body paint. Flags waved with rainbows of every color. Between floats marched groups representing businesses, charities and even churches. Some waved streamers of condom packages like ribbon dancers.

Drag queens perched on classic cars waved to the crowds like royalty and rained beads and candy. Some men marched in nothing but G-strings. Some women paraded shirtless, stickers covering their nipples. I stood on a stool, threw my hands into the air and shouted “ALL SODOMITES WILL BURN IN HELL!”

Yeah. I was a Bible thumping, shock-and-awe, shouting street preacher. We were so caught up in evangelism that we regarded success in terms of ‘Obedience to God’ not ‘Effectiveness of Ministry’. I was so zealous I thought my bigotry was morally right – even loving!

The response was immediate; profanity rose up in response to my spiritual epithets. I believed this parade terminated at the precipice of Hell and these souls were too blind to see it. I railed against sodomy, gay men, lesbians, and other sinners. I wanted to raise awareness of Hell. Parade attendees wanted to raise awareness that they were people – worthy of love, life and the same rights afforded to everyone else. I endeavored to pronounce judgment on the City of Dallas.

Over the dull roar of the crowd I could hear my voice echoing off buildings. Our words were a staccato of Bible verses or inflammatory quips. I quoted inaccurate “facts” about homosexuality. I exaggerated details about diseases. I spouted “statistics” regarding abuse and suicide – never once thinking I represented the trauma of being gay. I could feel my heart racing. I was high on adrenaline. I gave another preacher a go and I listened to the street team arguing with angry parade goers. Some were even professing Christians.

There’s a psychological phenomenon called cognitive dissonance. It’s the discomfort which arises when someone behaves contrary to held beliefs. We believed the nutshell of Christian apologetics; “a man with an experience is never at the mercy of a man with an argument.” Yet we were telling people that their experiences were worthless and they were hell bound. That started my own cognitive dissonance.

The day passed in a blur. I remember feeling repulsed (and secretly titillated) when a heckler shouted for me to preach again. Apparently I was cuter than the current preacher because I looked like Lex Luthor from the television show Smallville .I thought I was a champion of the Gospel. In reality, I literally looked at the crowds and denied that their lives were worth anything. I took a handful of ancient words devoid of reason and turned them into one-liners about the evils of sodomy.

That was my first pride parade.

I spent several years preaching, but I have long since closed my Bible and stepped down from my soapbox. Justifying God’s commands versus ‘How the World Works’ became exhausting. What I believed to be true and what I observed was hard to reconcile. I can look back through a zealous career in amateur ministry and trace the path from being “born again” at seventeen, to the top of that stool on a hot street corner in Dallas one summer. I am now a proud member and ally of the community I tried to hate. I embrace who I am today and celebrate my friends and family.

If you encounter a douchebag for Jesus like I was you may want to jeer back, but I guarantee even banner wavers silently proclaiming “God Hates You” are spoiling for a fight. There is no reasoning with a street preacher while they rage on their soap box.  Sexually prejudiced evangelists will view anything Gay Pride as a sign of impending judgment from God – they have for ages. For every piece of misleading literature by hate groups there is more evidence to embarrass them. Your best weapon is embracing who you are. The voices which claim to speak for god will be silenced by reason, science and the love of LGBT people across the world.

You know what? I’m going to make this year my first Pride parade.