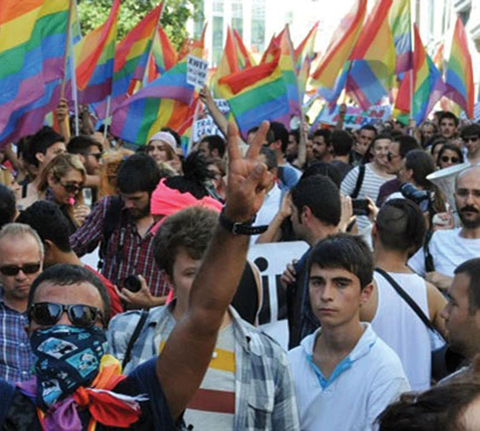 I’m writing this from within my toilet paper fortress of solitude. Right now, we’re all scared, we’re ready to murder our roommates, and we’re developing scurvy because we forgot to horde fresh fruit.

Let me assure you. We will survive. Oh, we won’t be the same, but in the end, we’ll survive. Why do I say that? Because we’re a bunch of queers, that’s why.

Most of us are too young to remember the AIDS crisis of the 1980s and early 90s, but that was an epidemic that was centered on us, and we survived it. Oh, it devastated our community and probably set back our equal rights movement by a decade we survived it.

I know that’s maybe not the most inspiring argument, but this is definitely a “bite down” moment. The isolation is going to suck, and it’s going to be painful, but if we can survive AIDS, we can survive coronavirus.

I’m just old enough to remember AIDS at its peak being in the news almost every night. Some celebrity had just died, new infection numbers were out, another protest in another city. People we’re calling it the “Gay Plague” if they were nice, “God’s Judgement” if they weren’t.

I remember famous people wearing t-shirts that read “AIDS Kills Faggots Dead,” and most people just laughed about it. Rude young boys knew as many dirty jokes about women’s anatomies as they did about gay people dying of AIDS. It truly sucked.

People forget that for a time, funeral homes wouldn’t take AIDS victim’s bodies to bury them. Instead of hospitals having people die in quarantine, separated from their loved ones due to fear of infection. They used to keep people’s partners, the ones who truly loved them, from visiting them in the moment of their passing because they weren’t considered immediate family.

What if the last memory you had of the love of your life was taking their frail and weakened body to the hospital and them begging to see you, but you wouldn’t see them alive again after that door shut? Maybe if you were lucky, they had an accepting family and would let you into the room. But this was the 80s, so it wasn’t really likely.

Of course, after they died, the parents who threw them out of the house would take half of your joint bank account and throw you out of your home because it was in their name.

But we survived. We adapted.

We started learning about the disease, how you got it, how to prevent it, and how to live with it. New relationships were formed. It inspired us to fight even harder for our rights and to be respected in the greater society. Our community of bars and bathhouses became one of community centers and Pride Festivals. We elected officials who respected our rights, who marched with us. It became unacceptable to hate us instead of a way to make you rich and famous. Once we were jokes, and now we’re almost running everything.

Yes, this is all scary, and who knows how it will end? Yet, after all these years, after all, we’ve been through. We will survive. We have to. We’re queers. We’re too fabulous to let this beat us.