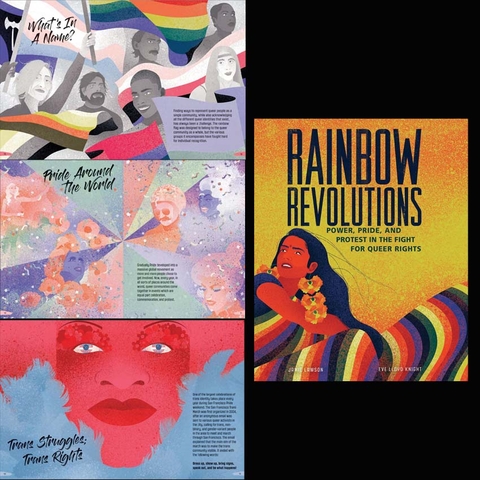 Rainbow Revolutions: Power, Pride, and Protest in the Fight for Queer Rights.

This Pride month will be different for everyone across the globe. There will be much fewer Pride parades and festivals in our June Pride month if any at all. Perhaps some will convene later in the year.

It is time to think outside the box. Instead of the parades and festivals, what about reading about our queer history? Or, better yet, learning about queer history with our queer youth?

“The opportunity for writing Rainbow Revolutions landed squarely in my lap,” said Jamie Lawson, a queer anthropologist working at the University of Bristol. “I was approached by the publishers directly and asked if I would be willing to write the book.”

The book is a beautifully illustrated, easy to read a collection of work outlining the global fight for LGBTQ+ rights from the 19th century until the present, aimed at ages 11+.

Lawson is an academic by trade, an anthropologist specifically - working with LGBTQ+ subcultures - and has a history of engaging in queer activism in various ways.

“As a gay man, I take great pride in the history of my community and was thrilled to be able to write a book, particularly for younger people,” he said. “It was and is an absolute privilege, and I am very proud of it.”

Lawson used his collection of gay history books in his research for writing Rainbow Revolutions. His collection includes classics like David Carter’s Stonewall, Cleve Jones’ When We Rise, and I Pierre Seele, Deported Homosexual. Other queer history books were also used.

“Rainbow Revolutions covers a fair amount of history, so some of the more recent content, for example, the information on marriage equality around the world, or the size of Pride celebrations in different countries, I could find quite directly,” the writer said. “Other bits of older history I had to dig a little more for. Queer history isn’t recorded like straight history. It doesn’t get written down and celebrated in the same sort of way, which is part of the reason I was so excited to write this book!”

He said he learned a lot as he researched each chapter. He has talked a great deal about the need for our younger queer community to know and understand queer history.

“I think there is a lot of pressure from the mainstream, cishet world to ignore queer history,” Lawson said. “The straight world seems to want to pretend that queer people are a very modern phenomenon, a brief blip in history perhaps. Maybe if they can pretend we only recently sprung into being, they can imagine that we’ll disappear soon too?

“Alongside that, the HIV/AIDS crisis took a whole generation of voices away from us - all the people who would have recorded history, all the storytellers and poets, aren’t around to share their knowledge, which is tragic.”

He said these instances left sort of a vacuum where queer history should be. Queer kids are often disconnected from queer history, which is a very isolating experience.

“Having a history gives you a culture, gives you a community; you know that you’re not alone in the world or in time,” he said. “I’m so glad that a young queer person can turn on the TV and tune in to Drag Race, or proudly fly a rainbow, or trans flag at school.”

He wants our youth to know what those things connect to, what was fought for and won, and what is still at stake.

“I want them to know they have ancestors they can rely on if they need them.”

Lawson connected with illustrator Eve Lloyd Knight through the publisher.

“I think she’s an absolutely fantastic illustrator and was a lot of fun to work with,” he said. “I would send drafts of my chapters to my editor, who would forward them to Eve for translation into sketches. Seeing those works of art come to life alongside the text was an amazing experience.”

Lawson said it was important to him to raise voices that were not his.

“As a white cis man, I have a lot of privilege inside and out the broader queer communities, so I wanted to be as inclusive and respectful as possible throughout,” he said. “These are difficult times for minority groups everywhere, and we need to pull together to survive. A sense of inclusive shared history that is nevertheless respectful of difference is crucial to that.”

Rainbow Revolutions is available on Amazon and Goodreads, but for the quickest way to order, click this link.