It's been 25 years since the Oklahoma City bombing 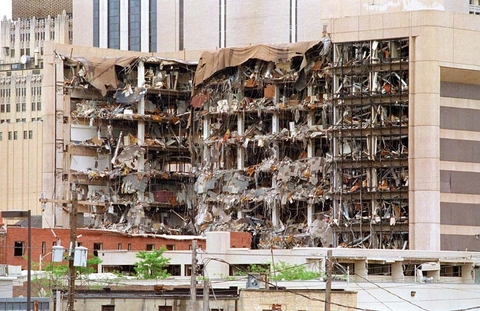 It's been 25 years, but the people of Oklahoma City will never forget.

On April 19, 1995, a truck bomb was detonated in Oklahoma City by a right-wing extremist, killing 168 people and injuring several hundred more. Nineteen children were among those who lost their lives as a result of the blast at the Alfred P. Murrah Federal Building.

Until the attacks on the World Trade Center and the Pentagon on September 11, 2001, the bombing was the deadliest act of terrorism on US soil.

Each year the Oklahoma City National Memorial & Museum, which was built on the site of the Murrah building to educate visitors about the impact of violence, hosts a remembrance ceremony, marked by 168 seconds of silence and the reading of the victims' names.

The coronavirus pandemic means people cannot attend today's event in person, but the ceremony was broadcast and livestreamed. The moment of silence began at 9:02 a.m., the moment of the blast.

On Friday, the OKC Memorial tweeted: "On April 19th, 1995, 168 people were killed - 19 of them children. They were mothers, fathers, sons, daughters, grandparents, friends and coworkers. Each of these individuals were unique."

To commemorate each victim, the memorial has 168 stone and glass chairs arranged in rows on a lawn beside a reflecting pool.

Timothy J. McVeigh and Terry L. Nichols, both former US army officers, were convicted of the 1995 attack. They were associated with the extreme right-wing Patriotic movement, which views the federal government and law enforcement as illegitimate.

McVeigh was convicted in 1997 of 11 counts of murder, conspiracy and using a weapon of mass destruction, and was executed by lethal injection in 2001.

This made him the first person to be executed in the US for a federal crime since 1963.

His co-conspirator, Nichols, was convicted on federal charges of conspiracy and eight cases of voluntary manslaughter.

Nichols was later found guilty of 161 counts of murder by a jury in Oklahoma state court. He is currently serving a life sentence.