“When I first heard about Sara Cunningham, and her FB post and thought ‘Wow,’” said Jamie Lee Curtis in a YouTube video.

What Curtis is referring to is the July 20, 2018, social media post Sara Cunningham, Oklahoma City resident, and founder of the Free Mom Hugs (FMH) organization had posted on her social media.

“PSA. If you need a mom to attend your same sex wedding because your biological parents won’t. Call me. I’m there. I’ll be your biggest fan. I’ll even bring the bubbles,” Cunningham wrote. 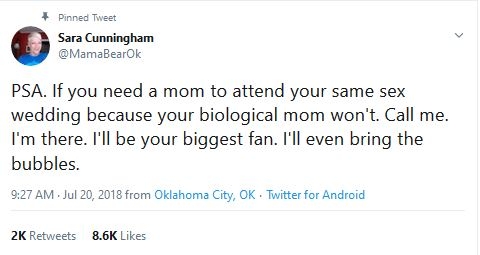 Curtis said she thought that might be the most beautiful act of kindness and love and acceptance, she had ever heard. She did what “everyone” does when they see something like that.

The YouTube video, released May 7, announces the plans Curtis has made with Lifetime to produce the story of Sara Cunningham, an Oklahoma City woman who wrote a book about her struggles as a Christian in accepting her gay son.

Katrina Kalb, who does public relations for FMH, recalls Cunningham’s words when she found out the movie would become a reality. “I’m hyperventilating,” “I’m shaking too much to text!,” “What I wouldn’t have done to see this story back when Parker first came out,” and “The impact this has for moms like me to know that they are not alone.”

Cunningham said back when she first received a message from Jamie Lee Curtis, and jokingly she said she hoped she wasn’t getting Catfished!

“At first, she was intrigued with the PSA about being a Stand-In Mom,” Cunningham reflected. “Then, as our conversation continued, she found out about our story and the book I wrote How We Sleep at Night. A Mother’s Memoir. It was a few days later she let me know she read my book, loved it, and was interested in acquiring the rights to it.”

Cunningham said she gets the feeling of validation to have her story told about her struggle with coming to accept her gay son, Parker.

“Validation for me, my family and families like mine.”

She said she absolutely knows this story will change lives.

“I know there is a mom out there like me then who needs to hear from a mom like me now,” she said. “What I would have done to have had this resource when I was trying to figure things out. I needed to hear from someone who shared my faith that it’s OK to search this matter out, and when you do, you get educated, and education is powerful.”

Cunningham started FMH soon after her book was released in October 2014. She hopes the publicity will further the platform of FMH.

“I’ve tried my best to embrace it [publicity] and use it as a platform to further the mission of Free Mom Hugs. I want to bring positive attention to Oklahoma and a community I adore.

“Add to that, to not drive my family crazy!”

Parker Cunningham said they are so thankful to be on this side of the story.

“The fact that it’s being turned into a movie is just a bonus,” he said. “Some parts of it have been difficult, but most of this crazy chapter has brought healing for us both.

“Through our work with Free Mom Hugs and hearing the stories of my community and other parents, we know that someone is coming out every second of every day. It may be an LGBTQIA+ person or as the parent of someone on the spectrum, often under circumstances where they feel lost or alone. I hope that this movie helps people not feel lost or alone, that it brings people hope and gives families a little grace to know that love is so much greater than fear.”

He said their story is unique to them, but the movie has great potential to be monumental in the lives of families everywhere.

We asked who he wants to play his role in the movie.

“I really have no idea,” he exclaimed. “So many people have asked me or suggested actors who they think look most like me. I have been wildly flattered, for the most part.”

He said he would love for “Parker” to be played by a gay actor, maybe even a chubby gay actor.

“I try not to envision it too hard, to trust the process and know the right person will be involved in this project, he said, adding, “Both my mom and dad insist that I be played by Adam Lambert!”

It is unknown at this time when the movie will begin production or be released. Sara said she is hopeful it will be around Mother’s Day.