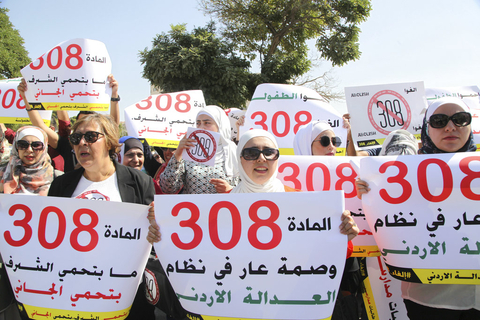 AMMAN, Jordan (AP) — The repeal of a Jordanian law that allowed a rapist to escape prison by marrying his victim was bittersweet news for a Jordanian woman whose daughter was assaulted when she was just 13 years old.

Tuesday's vote by parliament's lower house came too late for the hairdresser's daughter who was coerced into an abusive marriage to her attacker as a condition for getting out of "protective" state custody.

Her assailant never served a day in jail.

"Today I'm very happy that this law was canceled," said the 49-year-old mother of the teen, speaking on condition of anonymity to protect her daughter's privacy since victims of sexual assault are still widely stigmatized.

"But at the same time, I'm heart-broken," she said in a phone interview. "Where is my daughter's justice?"

Women's rights activists hailed Tuesday's vote as a major victory after a years-long campaign, but said a long struggle lies ahead.

Despite the country's pro-Western political orientation and cosmopolitan urban elites, many areas of Jordan remain socially conservative, with entrenched notions of "family honor."

This includes the belief that having a rape victim in the family is shameful, and that such "shame" can be expunged through marriage.

Tuesday's decision and another vote earlier this week — to prevent lenient sentences for those who kill in the name of "family honor" — must still be approved by parliament's appointed upper house and by King Abdullah II. Such approval is expected since the royal court and the government backed the reforms.

With final approval, Jordan would join Tunisia, Morocco and Egypt, which have canceled their "marry the rapist" clauses over the years. Tunisia's repeal took place less than one week ago.

The clause remains on the books in Algeria, Iraq, Kuwait, Libya, the Palestinian territories and Syria, as well as several countries in Latin America, the Philippines and Tajikistan, according to HRW.

Tuesday's vote to scrap Article 308 of the penal code capped an emotional parliament debate, reflecting the schism in Jordanian society.

Parliament's legal committee had proposed amending Article 308 so that girls between the ages of 15 and 18 would be able to marry their rapists. They portrayed the marriage option as a way to protect minors.

When Mustafa Khasawneh, the head of the legal committee, presented those arguments, activists in the spectators' gallery murmured in disagreement.

Dima Barakat, a leading activist, later said that those forcing a girl to marry her rapist "are killing this girl a thousand times a day, at least." The attacker "took away her dignity, her honor and took away her life," Barakat said.

As the vote approached, lawmakers jumped to their feet, beckoning and yelling at others to raise their hands in support of repeal. Shouting broke out across the room while the spectators upstairs held their breath.

After several minutes of chaos, the repeal was announced.

Cheers and applause erupted in the hall. Some of the activists embraced one another, laughing. "This is a victory for the women's movement and human rights movement in Jordan," said Salma Nims, the secretary general of the Jordanian National Commission for Women.

The Islamic Action Front, a group of lawmakers affiliated with the Muslim Brotherhood, voted in favor of repeal, citing religious grounds.

Religious law, or sharia, does not condone protecting rapists, said legislator Dima Tahboub, spokeswoman for the IAF.
She said much work needs to be done in Jordan to protect women from violence. Jordan lacks psychological and social support for victims and their families, she said. Public attitudes stigmatize victims rather than supporting them. Children borne of rape grow up ostracized, with less access to civil rights.

"We need to create an atmosphere where the victim is being supported by the wider community," Tahboub said.
Jordan also lacks safe shelters for women at risk of family attack due to "honor" issues, and often detains women in protective custody, keeping them in prison or in shelters that they cannot leave.

When the hairdresser's daughter became pregnant after being assaulted repeatedly, the state took her to a shelter for underage girls at risk. There, the mother was told that her daughter could not leave unless she married her rapist.

"I accepted the situation in order to protect her," the mother said Tuesday. "They gave me no choice. She did not want to marry him, but she was threatened by everyone. She had no choice."

Earlier this week, parliament closed a legal loophole that had given courts the discretion to impose sentences of as little as six months on those who killed female relatives in the name of "family honor."

Under the new amendment, killing "in a fit of rage" can no longer be considered a mitigating circumstance in such cases.
These two amendments work together to close an escape route for rapists and remove an excuse used by men to get away with killing their female relatives.

"Today is a great victory for women," said Musa Maaytah, minister of Political and Parliamentary Affairs.