Jurors focus on statement in trial of Pulse shooter's wife 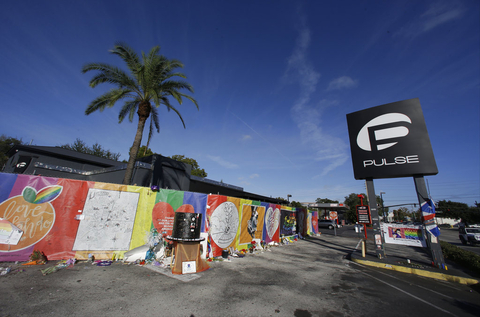 Artwork and signatures cover a fence around the Pulse nightclub, scene of a mass shooting, in Orlando, Fla. AP Photo/John Raoux.

ORLANDO, Fla. (AP) — Jurors deliberating the fate of the Orlando nightclub shooter's wife took a closer look at the statement she made to FBI agents in the hours after the attack that killed 49 people in 2016.

After a couple of hours of discussions, jurors asked to review Noor Salman's statement and the judge printed out copies for them. They will resume discussions Thursday morning.

Her attorneys fought to keep the statement out of the trial. They say it was coerced and she signed it because she was tired and feared losing her young son.

Prosecutors said the statement showed she knew about Omar Mateen's attack and did nothing to stop it.

"The last two years, Omar talked to me about jihad," Salman said, according to the statement.

Salman, 31, is charged with obstruction and providing material support to a terrorist organization. She faces up to life in prison if convicted of all charges.

Prosecutors said Salman and Mateen scouted out potential targets together — including Disney World's shopping and entertainment complex — and she knew he was buying ammunition for his AR-15 in preparation for a jihadi attack.

In the hours after the shooting, she lied to the FBI about the number of guns her husband had and his internet use, which included watching beheadings and visiting Islamic State group websites.

"She does not have to be his equal in the attack, and in fact she is not," Assistant U.S. Attorney Sara Sweeney said.

Defense attorneys described Salman, who was born in California to Palestinian parents, as a simple woman with a low IQ. She was abused by her husband, who cheated on her with other women and concealed much of his life from her, they said.

"It's a horrible, random, senseless killing by a monster," Swift said. "But it wasn't preplanned. The importance to this case is that if he didn't know, she couldn't know."

Jurors asked to review the FBI statement a couple of hours into their deliberations and a judge printed off copies for them. Before the trial, defense attorneys unsuccessfully argued that the statement should be tossed.

The jurors also asked a question about an index of evidence and about the wording on one of the charges Salman faces. The judge refused to provide an index but did clarify the wording.

During the trial, prosecutors said Salman advised Mateen to lie to his mother when she inquired of his whereabouts on the night of the shooting.

They said Mateen, who was born in New York to Afghani parents, intended to attack Disney World's shopping and entertainment complex by hiding a gun in a stroller but became spooked by police and instead chose the gay club as his target.

Sweeney said Salman "knowingly engaged in misleading conduct" when she spoke to the FBI in the hours after the attack.

She claimed her husband didn't use the internet in their home, but he did. She told investigators that Mateen had deactivated his Facebook account in 2013, but investigators found that he had an account up until the month of the shooting — and was friends with his wife. She said her husband only had one gun when he had three, and that he wasn't radicalized.

Mateen, who had pledged allegiance to the Islamic State group, was killed by police in the hours after the Pulse shooting.

Salman's attorney took the jury through the hours of her life before the attack. She called a friend and her uncle in California, saying that she was coming to visit and that Mateen would be joining them.

She talked with her in-laws, ate at Applebee's and texted Mateen. He didn't respond. She later went on Facebook, read a book and then texted Mateen again.

"You know you work tomorrow," she wrote.

He responded: "You know what happened?"

She wrote, "What happened?"

Then he sent his last text: "I love you babe."

Swift said, "one person knows what's happened in this, and one person doesn't."

Earlier this week, defense attorneys asked the judge for a mistrial after they found out that Mateen's father had been an FBI informant for years. The judge rejected the request, saying the trial was about Salman, not Mateen's father.

Salman did not testify in her defense.