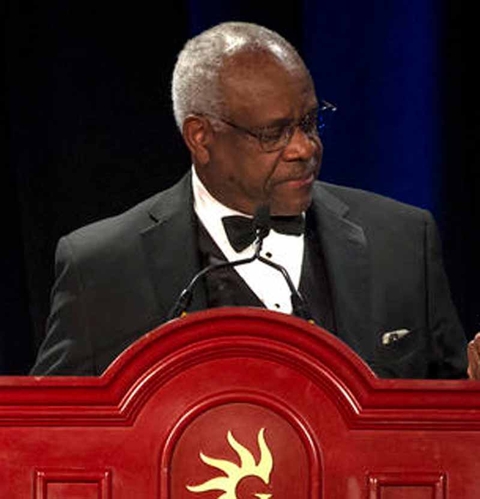 Washington (AP) — Supreme Court Justice Clarence Thomas says conservatives should make the work of the late Justice Antonin Scalia a "prologue" in the effort to limit the power of the courts and other branches of government.

The Supreme Court has too often granted rights to people that are not found in the Constitution, Thomas said, citing the decision in 2015 that made same-sex marriage legal across the country. Both Scalia and Thomas dissented from that decision.

"With such unchecked judicial power, we leave it for the least accountable branch to decide what newly discovered rights should be appended to our Constitution," Thomas told 1,700 people at a Thursday night dinner to honor Scalia, who died in February.

He paraphrased Lincoln's Gettysburg address to exhort the audience to "be dedicated to the unfinished business for which Justice Scalia gave his last full measure of devotion."

Thomas said he and his longtime friend and colleague formed an "odd couple" of a white New Yorker and a black man from Georgia. "But together, we soon became our own band of brothers," Thomas said.

Thomas' talk to the Federalist Society, along with one earlier Thursday by Justice Samuel Alito, came at an unexpectedly upbeat moment for the conservative legal organization.

Many among its 40,000 members had resigned themselves to having Scalia's seat filled by someone more liberal, expecting that Hillary Clinton would become president. President Barack Obama had nominated Judge Merrick Garland for the seat.

Now Thomas is more likely to acquire a new conservative ally. Indeed, nine state and federal judges on Trump's list of possible Supreme Court nominees are taking part in the group's conference, which runs through Saturday.

Thomas regaled the crowd with portions of Scalia's opinions over the years. He urged "that these words spoken and written by Justice Scalia not be the final word written in support of originalism and constitutionalism. Rather, they ought to be a prologue." Originalism refers to their shared belief that the words of the Constitution should be given the meaning they had when it was written.

Alito issued his own rallying cry to conservatives earlier Thursday, describing religious freedom and gun rights as among "constitutional fault lines," important issues at stake in the federal courts.