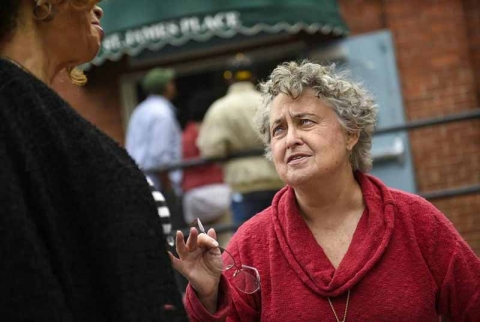 Sister Donna Ryan spoke recently with a prostitute outside a food pantry. (Photo by David Eulitt)

The Kansas City Star (http://bit.ly/22fcIrZ ) reports that Ryan, 74, a short woman who walks with a bit of shuffle, said, "And good morning to you, dear."

Everyone seems to know Ryan on this stretch of Troost Avenue. Especially the prostitutes who work the nearby corners. Drug addicts, mostly. Ryan tries to help them and keep them safe. They are victims, she says, not criminals.

Not far away, Sister Theresa Maly, 80, serves breakfast to the poor at Holy Family House. She commented once to a man in line that he seemed to be lugging quite the load in an old duffel bag.

Then there's Operation Breakthrough. The child care center is run by Sister Berta Sailer, 79, long famous for her devotion to inner-city children and her clashes with bureaucrats.

In the next block is Journey to New Life, founded in part by Sister Rose McLarney, 75, who lives in a large house with other nuns and women fresh out of prison.

Fifty years ago, these "women religious" were young and living in convents — obedient and isolated in a Catholic world. Most probably would have worked their whole lives in Catholic schools and hospitals.

But then this thing called Vatican II came along and set nuns loose on America.

The new mission was to go into the larger world and find the impoverished and oppressed of all faiths or no faith. Serve the poor, feed the hungry, work for social justice.

Many didn't even know how to drive. But over time they made their way to the back hills of Appalachia, the Jim Crow South and the grimmest streets of American cities. They got their hands dirty.

"They helped people nobody else would touch," said Susie Roling, who has worked for the nuns on Troost pretty much her entire adult life. "Their work and lives are the same thing. They give themselves to the people along this street."

But here and across the country, that first post-Vatican II class is now pushing 80, or beyond. Some have died. Many are retired. Maureen Smith at 84 knows she's not the young firebrand who protested in Selma, Ala., just days after Bloody Sunday at the Edmund Pettus Bridge.

"That was a life-changing experience," said Smith, who went on to work many years in Kansas City's poorest neighborhoods and now lives retired in a Sisters of Loretto mother house in Kentucky.

"But then, Vatican II changed all our lives. Dramatically. And it needed to happen."

Looking back at the half century since she and other young nuns ventured into the unknown, Smith put it this way: "I believe the good we did shapes the world today. I think we raised a light in the darkness that can never be put out."

Evening traffic rushed by on Troost as a man named Speedy Blunt came down the sidewalk.

He smiled big when he spotted three friends — McLarney, Maly and Ryan.

Hug time, all around.

"He's from the neighborhood and we've known Speedy for a long time," Maly said.

The nuns set up shop in that area because of the bus line — easy access for the poor, addicted and lonely.

In a way, this part of Troost stretches all the way to Rome.

Go back a half century. The post-World War II era had brought new technology, nuclear weapons, new borders, a cold war, a push against oppression, a call for human rights around the world and, of great concern to religious leaders, growing secularism.

In October 1962, the Second Vatican Council convened in St. Peter's Basilica, under Pope John XXIII, to explore the church's role in this modern world. It would close three years later under Pope Paul VI.

Changes included the wider use of English instead of Latin in the Mass and expanded roles for laypeople. The thing seen most clearly by the rest of society was the greater outreach by nuns.

For most of them, it was a time of great discovery.

"I had taught Catholic kids in a Catholic school and dealt with Catholic parents and lived in a convent," Ryan said. "We did what Mother Superior said and we were in bed by 9:30.

"I didn't really know how people lived east of Troost."

Not everyone jumped on board.

"Some left, sure," said Helen Garvey, past president of the Leadership Conference of Women Religious, which represents about 80 percent of nuns in the U.S.

"It was all so different. We were being asked to do so many things we had never done. It was a very exciting time. It was the turbulence of the '60s and we were part of that. Selma, civil rights, Vietnam, nuclear weapons.

"Later it was Iraq, the death penalty and human trafficking."

Sister Maureen Smith worked at a community center on 12th Street between Vine and Woodland. Workers there tutored children at public housing projects, operated a thrift shop and ran a food pantry.

She later became a lawyer and spent many hours talking to inmates in the Jackson County jail. She got arrested — inside a Kansas City police station.

Others here and across the country worked in immigration, child care and education. Some started prison ministries. Sister Helen Prejean, who worked with inmates on death row, wrote the award-winning memoir "Dead Man Walking."

The work has carried on, even as a priest sex abuse scandal rocked the church.

So what happens to all the work started by those nuns?

As the country song asks, "Who's going to fill their shoes?"

But she and others say the work will endure. Most of the nonprofit organizations, agencies and charities have boards of directors with lay leadership in place, ready to carry on.

It is the wit, fire and humor that will be harder to replace.

Ryan, a Sister of Mercy, often clashed with the then bishop of the Diocese of Kansas City-St. Joseph, Robert Finn, over her work with lesbian, gay, bisexual and transgender people.

"I was in his office so often I could describe all the furniture," she said.

There's a story about Sailer talking to legislators in Jefferson City about what needed to be done to help mothers in the inner-city raising children alone.

A man asked her why it always had to be "unwed mothers." Why didn't Sailer ever talk about widows and Army wives?

Sailer looked at him. First she said she hadn't heard the term "unwed mother" in a long time.

"It's single moms," she told him. "And sorry, I'm fresh out of widows and Army wives."

Roling, 35, sees Vatican II playing out today probably as clearly as anybody in Kansas City.

She works in a storefront office in the 3100 block of Troost Avenue. On a recent day she waved through the large window to preschoolers walking past. Holding hands, dressed in brightly colored coats and caps against the cold, they smiled and waved back.

The children were from Operation Breakthrough, founded more than three decades ago by Sailer and Sister Corita Bussanmas, who has retired.

Roling used to work there. She is now a caseworker at Journey to New Life, which helps people transition from addiction and incarceration.

A woman who lives in the Journey House with McLarney and other nuns said earlier: "I don't really have family — not anymore. The sisters are my family now and I know God is working through them to get to us.

"They've taught me to give something in my heart, and I never want to hurt them."

Roling attends St. James Parish with Ryan, who helped start The Justice Project to do outreach for street prostitutes. Every Tuesday evening, those women come to meet Ryan in the Willow Tree room, a place named because it is where they feel safe.

"Sister Donna is very spiritual. She knows no strangers," Roling said. "She seeks out the most marginalized and offers them friendship."

McLarney, Roling said, wears you down. She can talk to someone just out of prison, who is scared to be in the free world, then turn around and talk to a high-powered businessman or legislator.

"And make no mistake — when you are in a conversation with her, it is her conversation, not yours," Roling said.

McLarney is a Sister of St. Joseph.

Roling once stood in the cold with Maly, a Sister of Notre Dame, to protest in front of an Oklahoma pharmacy that provided drugs for executions in Missouri.

"She's very sweet and peaceful, and no one you want to mess with," Roling said.

Roling is closest to Berta Sailer, for whom Roling worked 10 years. Nothing made Sailer angrier than inequality when it came to housing, education and health care.

"Many times I've heard her say that as long as there is an us and a them, things can never be equal," Roling said. "And the more obstacles you put in front of her, the madder she gets and the harder she pushes through.

"But she also said it's not that people don't care, it's that they don't know."

Sailer, a Sister of Charity of the Blessed Virgin Mary, has for the time being stepped away from her duties for health reasons.

"All these nuns down here, they give the gift of dignity," Roling said. "And I've heard Sister Berta say that once you do that, you've helped that person become the best person they can be."

"They've all been doing that for a long time.

"How many lives have they affected in all these years?"