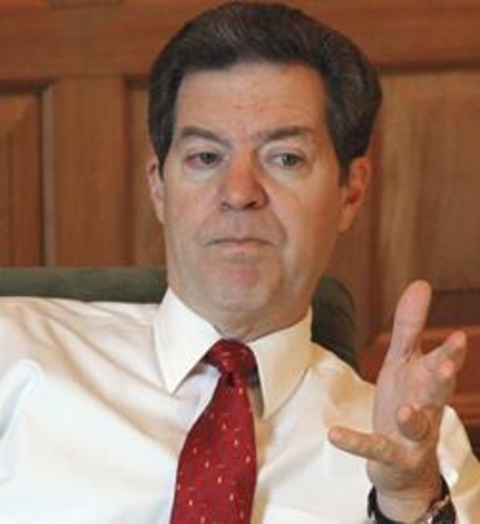 Kansas Gov. Sam Brownback opposes Medicaid expansion, but now has a bill on his desk that would do just that. Photo courtesy of ThinkProgress.

Seven years after the Affordable Care Act (ACA), often called Obamacare, expanded Medicaid to millions of people, GOP legislators are taking note. The failure of the ACA repeal and replace bill last Friday seems to have helped push Republican legislators, at least in Kansas, into doing what would have been unthinkable to them before the defeat of the GOP bill.

The Washington Post reported today that, “The Kansas state Senate voted 25 to 14 Tuesday to expand Medicaid — the state-federal program for the poor — extending eligibility to about 150,000 additional low-income people. The measure, which passed the House last week, succeeded with the support of all the Democrats in the legislature as well as a number of newly elected moderate Republicans who campaigned on a promise to broaden the program.”

Most media reports doubt that Kansas Gov. Sam Brownback will approve the bill. ThinkProgress said, “Brownback is philosophically opposed to the expansion, which in-state analyst’s estimate would cover 150,000 currently uninsured people. But with the state’s budget in disastrous shape because of his “real, live experiment” with right-wing tax policy over the past several years, Republican allies have already begun to break stride with the governor.

“Brownback has 10 days to decide what to do. His administration this week reiterated opposition to expanding the state’s Medicaid program, known as KanCare. But the governor himself has stayed mute, Alliance for a Healthy Kansas head David Jordan told ThinkProgress.”

The issue is the costs to states, and particularly to hospitals and healthcare providers. The Kansas Health Institute (KHI) reported in 2014 that, “Not expanding Medicaid will cost hospitals in Kansas and Missouri more than $9 billion over a 10-year period.”

It’s not just a Kansas problem. In The Gayly’sregion, Kansas, Oklahoma, Missouri and Texas have not expanded Medicaid. The KHI study said, “Hospitals in the 24 states that have so far declined to expand Medicaid to cover more low-income adults would lose a combined total of $167.8 billion.

“The report says while expansion would increase Kansas’ Medicaid costs by $525 million over 10 years, it would generate an additional $5.3 billion in federal funding.

The Washington Post said, "Coming on the heels of the failure of the Republican plan to repeal and replace Obamacare, the vote sent a strong signal that Republicans nationally are facing new pressure to participate in a program that they once saw as one of the law’s central evils.

“Sen. Vicki Schmidt, a Republican sponsor of the Kansas bill, said the failure last week of the Republicans’ American Health Care Act signaled that Congress is not going to come up with a better alternative.

“’I don’t believe we can wait for D.C.,’ she said during a floor debate on the measure Monday. ‘They had an opportunity … and they didn’t take it.’”

The Kansas legislature just dared Sam Brownback to veto the Medicaid expansion. Stay tuned for news on this issue as it develops.