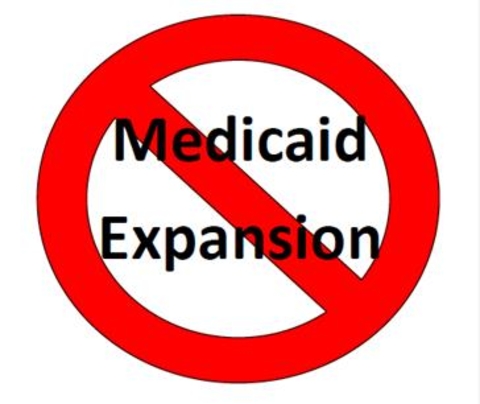 Governors Fallin and Brownback of Oklahoma & Kansas (respectively) failed to cover their poor with affordable health care. However, Arkansas, in this case, are treating their poor far differently.

Often criticized for byzantine rules and skimpy payments, Medicaid has signed up 444,000 people in just ten (of 25 states participating) in the six weeks since open enrollment began, according to Avalere Health, a market analysis firm. Data was not available for all 25 states (and the District of Columbia) which are expanding their Medicaid programs.

Twenty-five states have opted not to expand Medicaid programs, and the picture is not so rosy there. In Oklahoma, Gov. Mary Fallin elected not to expand Medicaid. For single people who are not disabled, but who have children, the annual limit on income to qualify for the program is $3,492, or $291 a month. If the state had elected to expand the program, starting Jan. 1, Medicaid eligibility would be available to those with incomes up to 138 percent of the federal poverty level — $15,856 for an individual or $32,499 for a family of four.

The Supreme Court gave states the right to opt out of the expansion, which is fully financed by Washington for the first three years, gradually phasing down to a 90 percent federal share. The consequence of the decision by Fallin is that extremely poor people in Oklahoma cannot get healthcare coverage.

In Kansas, an adult who is not a parent can’t qualify for Medicaid. Kansas is also not expanding their Medicaid eligibility.

Arkansas elected to participate in the Medicaid expansion under the Affordable Care Act (sometimes called Obamacare). In fact, according to a report by ABC news' Gillian Mohney, Arkansas became the first state approved by the Obama administration to use federal money for the purchase of private insurance plans by certain Medicaid participants.

According to the report, rather than simply expanding the Medicaid program, Arkansas can use federal money to buy private health plan coverage through the state’s new insurance exchange for adults with incomes up to 138 percent of the federal poverty level.

Because Kansas and Oklahoma are not participating in the expansion, or in providing an Insurance Exchange for their cittizens, people who fall below the Federal poverty level are not eligible for health insurance subsidies.

Private plans offered through troublesome online markets are expected to have enrolled a far smaller number of people.

The Obama administration plans to release October enrollment statistics this week, but publicly available figures already provide a contrast between a robust start for Medicaid expansion and lukewarm early signups for new, government-subsidized private plans offered separately under the law.

"Medicaid is exceeding expectations in most places," said Dan Mendelson, Avalere's president. "It is definitely a bright picture in states that have chosen to expand."

A big reason for the disparity: In 36 states, the new private plans are being offered through a malfunctioning federal website that continues to confound potential customers. And state-run websites have not been uniformly glitch-free.

Obama's health care law melded two approaches to advance its goal of broader insurance coverage. Middle-class people with no access to job-based coverage are offered subsidized private plans, while low-income people are steered to an expanded version of Medicaid in states accepting it.

Medicaid expansion is strongly supported by state hospital associations, medical groups because it advocates for the poor. Its main beneficiaries are expected to be low-income adults with no children living at home.

The White House is promoting the expansion. In a visit to Louisiana last week, Obama chided Republican leaders in the states who have turned thumbs down so far. In the audience was GOP Gov. Bobby Jindal, who was not swayed.

If the expansion is seen as a success, that could motivate supporters in states like Virginia, which just elected Democrat Terry McAuliffe to replace a GOP governor reluctant to widen the scope of government. Another key state is Florida, where GOP Gov. Rick Scott abandoned expansion efforts after hitting stiff opposition in the legislature. An estimated 1.3 million Floridians could qualify.

Avalere's statistic of at least 444,000 new Medicaid enrollees comes from 10 of the 25 states that accepted the expansion, so it only represents a partial count. Those numbers may also include some individuals eligible for Medicaid under current rules.

In Colorado, Medicaid applications in October were six to nine times what they were the month before, said Sue Birch, who heads the state's Department of Health Care Policy and Financing.

A years-long effort to reach eligible residents apparently succeeded in generating the increased demand. The state has installed self-service kiosks in community clinics, hospitals and libraries to sign people up. And a year ago, nurses statewide agreed to help by promoting Medicaid to low-income uninsured patients.

"We said to our nurses: 'OK, you're our bounty hunters. You go find our patients,'" Birch said.

Some states have used food stamp rolls to find people who might also be eligible for expanded Medicaid. Income verification forms used for food stamps require frequent recertification, so that means the program's beneficiaries are Medicaid-ready.

"In most states there's a system for determining eligibility that kind of lives with the other public programs," said Judy Solomon, an expert on the program with the Center on Budget and Policy Priorities, which advocates for low-income people. "We know already that there are people there who we can ask to raise their hands."

The nonpartisan Congressional Budget Office has estimated that 9 million people will gain coverage through expanded Medicaid next year, with another 7 million signing up for private coverage through the online markets that are off to a slow start.

Medicaid pays doctors less than Medicare, and much less than private insurance, fostering an impression that the coverage is no better than being uninsured, and maybe even worse. But a recent scientific study debunked that, finding that having Medicaid virtually eliminates the risk of catastrophic medical expenses due to a serious accident or the sudden onset of a life-threatening illness. It also found improved mental health, but not much difference in physical conditions.

Associated Press writer Kristen Wyatt in Denver contributed to this report, with additional Kansas, Arkansas and Oklahoma information added by The Gayly staff.