Kick with Vick and watch a flick - June version 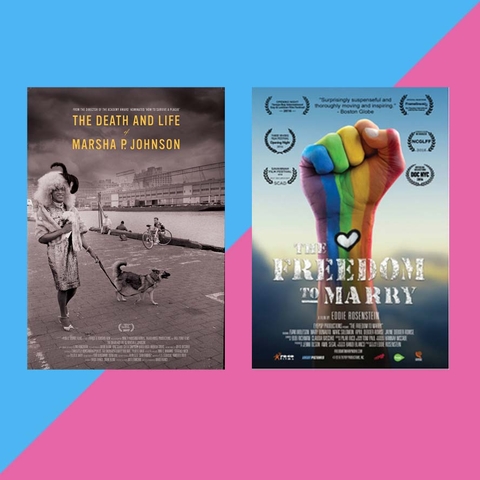 Did you know the murder of Marsha P. Johnson was never solved? She's the drag queen who started Stonewall, in case you didn't know. Do you know the struggle LGBTQ+ activists had in getting marriage equality laws passed for the nation?

In honor of Stonewall and marriage equality, I have reviewed a couple of films I think you are sure to enjoy!

The Death and Life of Marsha P. Johnson: If there is any validity to “the pride goeth before the fall” proverb, this historical perspective of these essential gay Pride LGBTQ+ activists tests it.

Marsha was pleased to describe herself as a street queen who was very prominent in the gritty New York scene from the time of the Stonewall Riots in 1969 forward, and the very first Pride marches up to her highly suspicious death in 1992 when she was found floating in the Hudson River.

The NYPD never adequately investigated the circumstances and theories surrounding Marsha's death. An eccentric old friend of hers named Victoria Cruz decides to resurrect the cold case of Marsha (even if official files are now missing?). Victoria uncovers conspiracy possibilities swirling around her death from a mob hit to an accident to suicide.

We get to follow the amazing odyssey of Marsha's fellow trans icon Sylvia Rivera from when they organize the first trans-rights movement organization, Street Transvestites Action Revolutionaries or STAR.

This film includes incredible footage of the humiliations, struggles, and persecutions of gender nonconforming trans personalities who have suffered within their own communities. It can be heartbreaking but demonstrative of how persistence and survival of illness, addiction, and homelessness are not for the fainthearted — commitment matters.

Whether Marsha was murdered or not remains unsolved and ambiguous, but the need for toleration and liberation is ongoing.

The Freedom To Marry: It would have been fairly easy to piece together a documentary that chronicles the same-sex marriage movement events leading to the historical US Supreme decision. That decision now allows us the freedom to marry, but it is no small feat to simultaneously keep the intimate flow while also structuring it as a suspenseful instruction manual. It takes structure for practically any movement to be socially and politically successful with their goals.

Director Eddie Rosenstein rightfully zeroes in on attorney Evan Wolfson as the inspirational struggle takes flight in the early 70s. His vision, strategies, and tactics for legal change are laid out, but then he teams with civil rights attorney Mary Bonauto and a few other key advocate personalities, and we learn that change is not so much inevitable. It is maneuverable by smart people, who understand how things work by making political machinery turn no matter how slow the gears grind.

We now find ourselves in a national situation where legal procedures seem in doubt or questionable, but watching this film seems to bolster a belief in our system if we have the required endurance and don't take for granted what we have won in the past. Obama reminded us, “Nowhere is it ordained that history moves in a straight line.”