The last flight out 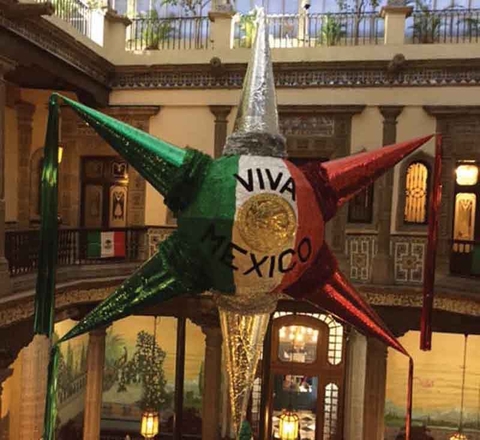 What an enjoyable trip! We went to Mexico City for the Independence Day festivities. Most gringos think of Cinco de Mayo as Mexican Independence Day, but it is not. May 5 celebrates the Mexican army defeating the French attempts to take over the country back in the 1800’s.

Their Independence Day is September 16, when Mexico declared its independence from mother country Spain, back in 1810. 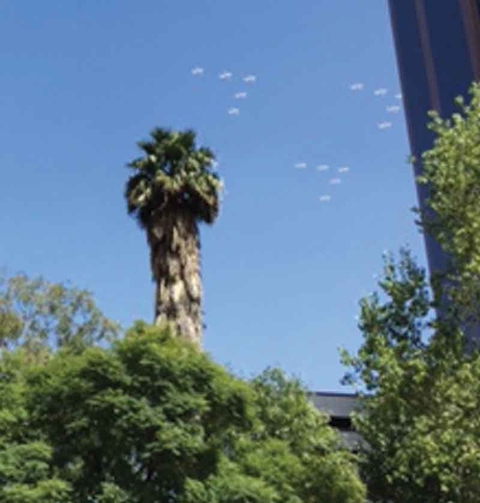 The Independencia celebration consists of the Presidente coming out on a balcony, reading statements into a microphone, and after each, the crowd shouts “Viva”. They sing their national anthem, then the crowd shouts, “Viva Mexico”. The ceremony closes with a tremendous fireworks display.

It is obvious there is no anthem, no vivas for the “have-nots”. We can see the swamp has not been drained in Mexico either, as the “haves” were the ones to see the show.

In the U.S., people in need stand with signs in areas where cars stop. There are many in Mexico, too. The difference is they are not just standing there. They are doing something; maybe an organ grinder playing music, a magician, a gymnast doing flips or some other talent. 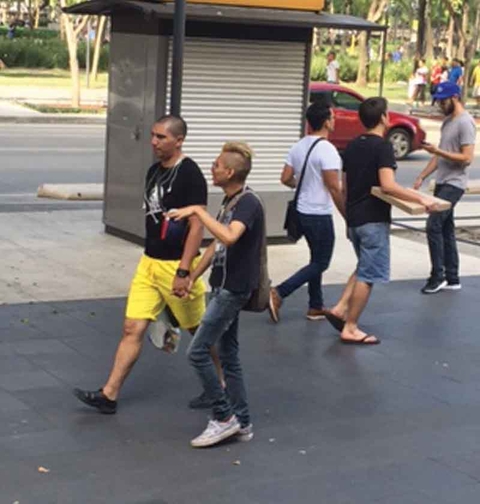 In Mexico City, it is not unusual to see two men walking, holding hands. Photo by Zach Mullaney.

Mexico City permits same sex marriage, so it is not unusual to see two men walking, holding hands. We saw this in many areas of the city that we visited, not just tourist areas. When we first saw it, we would point it out to each other, but after a while it was no big deal.

In the evenings we tried to hit some of the gay clubs, to see the “natives” out for the evening. One of them was Secrets, on the edge of downtown. The handsome security guy felt completely around the men, the chest, waist, down the outside of the legs and back up the inside, “accidently” copping a feel. With his big smile, one could tell he was enjoying his job (I would have, too.)  A pretty gal in a gray uniform frisked the women.

Inside, one could feel the throbbing of the music. We had to buy a bucket of ten beers, so asked for a light beer called Sol. The bar was packed with attractive people, everybody dancing with everybody – a totally mixed clientele.

An hour or so later, we wanted to leave, hence gave our remaining beers to a couple of cuties sitting next to us. From there, we went around the corner to Cafe Viena. It is a much more mellow men’s bar, and a good bar to stop for a brew after work.

Down in the Zona Rosa on Calle Florencia were two bars next door to one another. One, the El Vaquero was full of handsome Mexican cowboys in tight jeans. Next door was the El Taller, a good crowd of a mix of all kinds of men. Down a block, around the corner were about 100 or so bearded men, to us obviously gay, just milling around out on the sidewalk. Bears?

Our plans were to fly home on Tuesday, September 19. Returning to the hotel Monday evening, inserted under the hotel room door was an announcement that at 11 a.m. Tuesday, next day, a city-wide earthquake drill would take place with a need to vacate the building. There would be no electricity, nor elevator.

The drill was to commemorate the anniversary of the 8.5 earthquake that caused so much destruction on September 19, 1985. We needed to get to the airport for our mid-morning flight, and as a result, avoided the drill.

In flight, sitting in our seats, watching the little TV in the back of the seat in front of us, we saw “Breaking news! A 7.1 quake had struck Mexico City. The airport and runways are closed. In-air flights have been diverted.”

We sat there stunned!  The exact date, 32 years later! By now, on TV we’ve seen the destruction in some areas of the city. Such a good place to visit. Here’s hopes that “normal” returns as soon as it can.