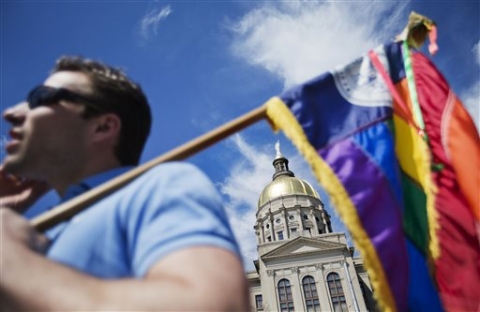 Two North Carolina lawmakers and a magistrate have asked a federal court to let them defend a religious exemption known to be discriminatory against gays. (AP Photo/David Goldman, File)

They largely blame their request on Attorney General Roy Cooper, who is personally opposed to the law but whose office represents the state in the litigation.

Senate leader Phil Berger, House Speaker Tim Moore and Alexander County Magistrate Brenda Bumgarner filed motions this week to intervene in the lawsuit as additional defendants, represented by private attorneys. They contend that Cooper cannot adequately defend a law that he is known to personally oppose.

Three couples sued in December over the law the General Assembly passed last year that allows local magistrates, who can preside over marriages, to opt out of performing all marriages if they have a "sincerely held religious objection." The law and litigation also covers assistant and deputy registers of deeds who issue marriage licenses.

"It's a waste of taxpayer dollars for legislators to pay outside lawyers to do the work our attorneys are already doing defending the state in this case," Talley wrote Friday by email. State attorneys filed their own motion late Friday asking the lawsuit be dismissed.

The request marks the latest incidence in which the Republican-led General Assembly has hired private attorneys to defend legislation, spending several million dollars. In some cases, GOP lawmakers have said they're concerned Cooper won't defend laws robustly because of his negative comments about them. The legal fighting has been magnified because Cooper, a Democrat, is running for governor.

"Nobody in North Carolina would accept this behavior from his or her private lawyer, and the taxpayers should not have to in this case," Moore and Berger said in a release.

Gov. Pat McCrory, a Republican, actually vetoed the bill, saying public officials who voluntarily swear oaths to defend the Constitution shouldn't be exempted from some duties. The legislature overrode the veto.

The plaintiffs, who include two same-sex couples, also argue religious belief doesn't trump carrying out an official's constitutional duties. They also say gay and lesbian couples are treated differently under the law. Dismissal motions by the state and potential new defendants say there are no allegations plaintiffs have been injured by the law.

Bumgarner's attorneys cited Cooper while writing separately Thursday that she be allowed to intervene. She also wants to represent in court up to 27 other magistrates who, like her, now utilize the exception.

In an affidavit, Bumgarner wrote she is a Christian whose religious conviction is that marriage is a union ordained by God between only a man and a woman. Marrying a same-sex couple, she said, "would substantially burden my sincerely held religious beliefs about marriage."

The Alliance Defending Freedom, a conservative Christian organization, is representing legislative leaders for free in the case, while two other private lawyers involved will be paid, Moore spokeswoman Mollie Young wrote in an email.