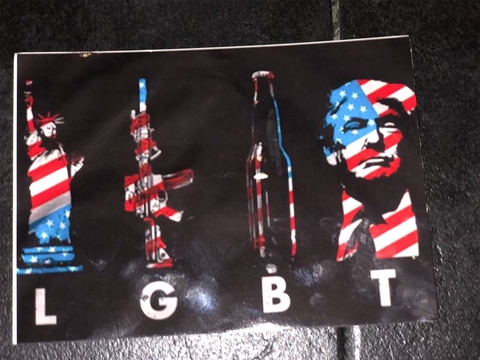 An unknown source sent the flyers, which portray a message not supportive of gender and sexual minorities.

On the flyer is a picture of the Statue of Liberty for L, a gun like the one used in the Pulse shooting for G, a beer bottle for B and a picture of President Donald Trump for T.

Many were shocked and horrified by the flyers, specifically the picture of the gun and its relation to the Pulse shooting.

“We live in a post-Pulse world in the LGBTQ community, especially in the bar scene,” bar owner Melvin Brown told NBC News. “To see somebody, send a postcard that had a picture of the weapon used in one of the deadliest assaults in this nation’s history, and one that happened at an LGBTQ bar, and to send that image to LGBTQ bars, to me is not a coincidence.”

According to executive director of the Tennessee Equality Project, Chris Sanders, the purpose of the flyers was to scare the community and display a conservative political agenda. Much of the gay bars in the Tennessee area host voter registration events and the opposition is likely to try and shut events such as those down.

“This has a very aggressive tone about it,” Sanders said. “It doesn’t use many words, but it uses a lot of images I think are meant to threaten us. The community's message back is, ‘Yes this is frightening, but we’re going to turn out and vote regardless.’”

Local police have been notified and said while an investigation is not being pursued, the department has provided more officers in the areas these bars are located.

Despite the threat, members of the LGBTQ community will continue to stand their ground and fight for their rights.

“It will galvanize,” Brown said. “People will respond in ways that are positive and uplifting, because that’s the way we choose to live our lives.”