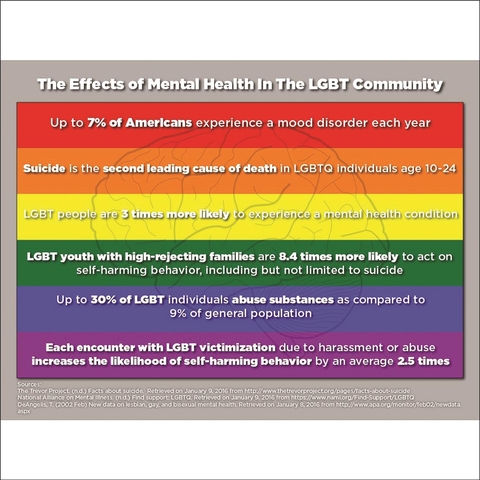 As an oppressed group, people in the LGBT+ community, like other minority groups, have shown higher rates of some mental disorders compared to those who identify as cisgender heterosexuals.

According to the American Psychological Association, studies find that LGBT+ people show higher rates of major depression, generalized anxiety disorder and substance use or dependency. These symptoms are also found to occur more often in LGBT+ youth than in their cisgender heterosexual peers.

“I have found that mental illness and my being trans have become quite intertwined over the years making it often hard to differentiate between the two,” comments Kaylee Gillette, a transwoman who has struggled with mental illness throughout her life.

“I don't think either are dependent on each other but rather a large amount of the mental illness is likely due to time spent attempting to live as the wrong gender and abuse I received due to it being fairly obvious that I am trans during elementary school.”

According to a survey published by Centers for Disease Control’s Behavioral Risk Factor Surveillance System in 2015, the gender nonconforming community is at risk specifically and it is noted that about one third of non-cis people have been diagnosed with depression.

“We know that LGBTQ individuals are significantly more likely than others to experience mental health conditions or addiction issues or family systems issues,” says Paul Williams, clinical director of outpatient services at NorthCare, a certified community behavioral health center. “In particular at this time we are finding that the transgender community is at an amped risk.

“Coming out as transgender can require huge social changes across spectrums. Across your family, your occupation, your social sphere, your body, medical procedures possibly and so this typically presents enhanced stress for [transgender] people.”

Also possibly at risk are other groups that have become a part of the LGBT+ movement more recently, such as polyamory. While being lauded by some psychologists as possibly being less stressful than monogamous relationships, polyamory is still heavily stigmatized in many modern cultures.

“Now that I understand everything that’s on my plate, it’s a lot easier to fit my head around it,” says Rachel K., a polyamorous pansexual recently diagnosed with generalized anxiety disorder and depression.

“I know I have anxiety so when my partner goes out and talks to somebody, I’m able to handle it a lot better because I know what my mind is going to do. I know kind of how I’m going to react to the situation so that I can counteract that because in my heart I understand all these different things. But that doesn’t mean that my anxiety’s going to go along with it.

Many psychologists agree that counteracting mental illness in LGBT+ people may have a lot to do with strengthening community and relationships.

“Correlating to whether [patients] do better or not is whether or not they have an attachment base to rely on,” says Williams. “You need friends and family or a surrogate family that you can be a part of who are affirming.”

It is also important to stress that LGBT+ mental illness struggles are not correlated with the person’s identity, that is to say, LGBT+ identities are not mental illnesses.

“I think one of the things that we’re dealing with in our field and we’re really passionate about combatting is the popular notion that LGBTQ people can be ‘therapist’ed’ out of their identity,” says Williams. “This is a mythology that has done tremendous damage to that community and we’re working hard to counter that mythology.”