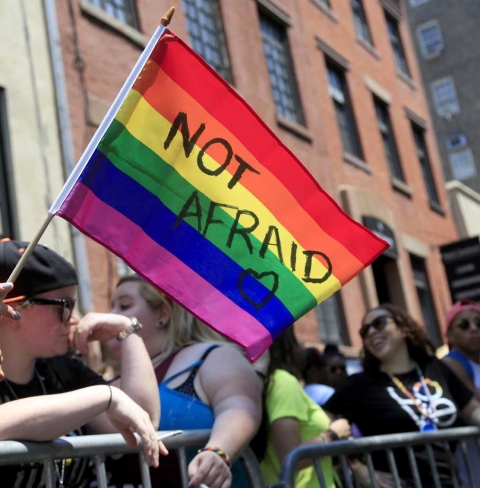 A California law passed in 2012 requires public schools to include prominent gay people and LGBT rights milestones in history classes.

A curriculum outline scheduled to be reviewed by the State Board of Education on Thursday would introduce the concepts in second grade through discussions about diverse families and again in fourth grade with lessons on California's place in the gay rights movement.

The proposed outline also touches on the topics in fifth and eighth grade — looking at gender roles in the 18th and 19th centuries and examples of individuals who flouted them — and throughout high school.

A capstone of sorts would come in U.S. government courses, where seniors would learn about the 2015 Supreme Court ruling that legalized same-sex marriage nationwide and recent court cases involving bathroom access for transgender students.

The changes are designed to satisfy legislation passed by California lawmakers five years ago that added LGBT Americans and people with disabilities to the list of social and ethnic groups whose contributions schools are supposed to teach and must appear in K-8 textbooks.

The legislation, known as SB48, also prohibited the adoption of any classroom materials that reflect adversely on gays or particular religions.

The law officially took effect in January 2012, but its implementation was slowed by two failed attempts by opponents to overturn it, budget cuts that put work on drafting recommendations for the school board and textbook purchases on hold, and competing educational priorities.

Carolyn Laub, a consultant for a group for LGBT parents called Our Family Coalition, said that while some school districts and individual teachers made their own efforts to incorporate gay history since the law passed, many were nervous about tackling the topic without explicit guidance from the state.

"Many, many educators are waiting for this framework to know, 'This is the content I'm supposed to be including,'" Laub said. "If educators perceive, rightly or wrongly, they may not get support from their administration if they face pushback from a parent who says, 'I don't want you talking to my kid about that,' they are reluctant to do a whole lot of inclusion."

Gay rights groups had complained that an initial draft of the outline issued in 2014 did only a cursory job of highlighting important LGBT figures and events. Twenty scholars affiliated with the American Historical Association offered detailed recommendations for beefing up the document, most of which were adopted, said Don Romesburg, chairman of the Women's and Gender Studies Department at Sonoma State University.

"One of the really important things about this new framework is it's a 21st century framework," Romesburg said. "It really recognizes that whatever your political view or opinion of LGBT rights, LGBT history is a part of American history, and you cannot understand where we are now collectively as Americans without understanding something of the LGBT past."

The additions dealing with LGBT history are part of an overall revision of the state's history and social studies framework, which identifies the historical concepts California students should be exposed to each year. The guidelines were last updated more than a decade ago.

An advisory commission that produced the recommendations the state school board will consider Thursday received thousands of written comments voicing support, expressing opposition or requesting simple changes, but only a small handful dealt with the gay history additions. Three teachers expressed concern that other important groups were neglected.

"There is no mention of Manifest Destiny or Native Americans," Brianna Leemkuil, a U.S. history teacher at Yucaipa High School in San Bernardino County, said of one 11 grade unit. "You want us to talk about a tiny LGBT community and ignore the killing of an entire people group?"