LGBT History Month: “We needed that” 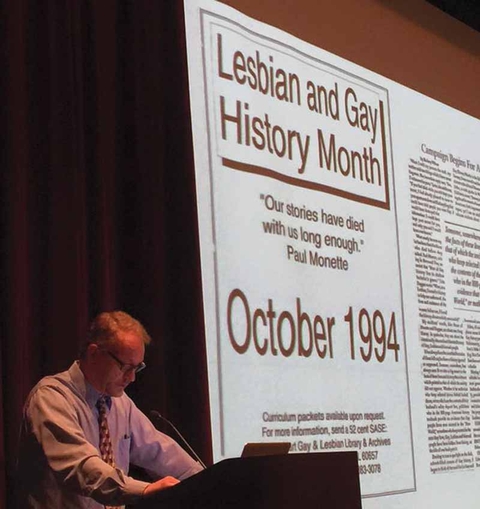 Rodney Wilson, who came up with the idea of LGBT History Month, speaks at the Missouri History Museum in 2015. Photo by Steven Brawley.

“The goal is to remember those individuals, those events, the people on whose shoulders we stand, who moved the fight for equality forward,” says Rodney Wilson, the Missouri high school history teacher who came up with the idea for LGBT History Month in 1994.

Wilson had long been an advocate for, and observer of, other “History Months” like Black History Month in February, and Women’s History Month in March. But as a gay man, “It just seemed to me that we needed something like that for our neglected corner.”

Getting the idea out, and getting people to agree to it, was no easy task. In 1994, Wilson didn’t yet have email. So he put together a written proposal in January 1994, and “sent it to everybody I could think of; I said ‘this is something that needs to be done.’” All the work was done by postal mail, and telephone.

He, and other activists around the country put together the National Coordinating Committee, which remained in place for the next three years. Others on the committee were Kevin Boyer, of Gerber/Hart Library and Archive; Kevin Jennings, founder of GLSEN; Johnda Boyce, a graduate student who was Wilson’s best friend from college; Jessea Greenman of the University of California, Berkley; and Torey Wilson, a suburban Chicago history teacher.

Celebrated the first year in 1994, it was originally called Lesbian and Gay History Month. The next year they added Bisexual to the name, but not without a debate. Since they were trying to get secondary schools, colleges and universities to observe the month, there was fear that having “sexual” in the title might scare off the high schools. But after discussing it, the coordinating committee voted to add Bisexual.

Because the history month was targeted at schools, Wilson looked for a month that wouldn’t interfere with school calendars. September, when school was starting, and May, a month of finals, were out. February and March were already taken, but there wasn’t a national “History Month” in October, so he picked that month, and it has been observed then since its origin. 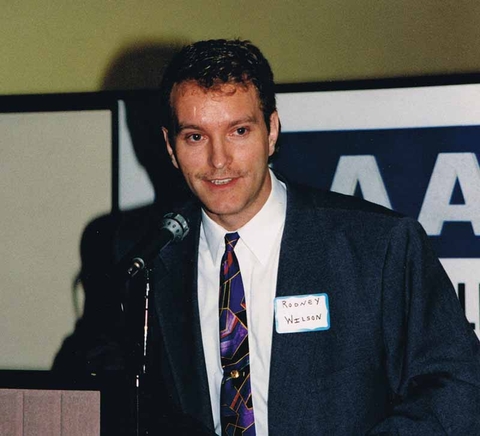 Rodney Wilson speaking about LGBT History Month at a GLAAD function in 1996. Photo by Scott Lokitz.

The current common usage for the month is LGBT History Month, with transgender being added as people became more aware of trans persons. Wilson noted how far inclusiveness in the LGBT movement has come since 1995, saying, “In 1995 it would not have crossed our consciousness to add transgender. I don’t think it would have been something we would have thought of in 1995.”

While in general LGBT History Month ends up focusing on “gay icons,” Wilson’s vision is broader. He includes people both well known, and who are not known at all, when he remembers the individual contributions to bringing the LGBT community to where it is today.

“It’s all sorts of people all over the place, pushing the line in the ‘70s and ‘80s and ‘90s. Yes, we have got things yet to do. We still have to get a national civil rights inclusion. But it’s all these people over the last 50 years, beginning in 1965, four years before Stonewall, that have brought us to the point we are at now.”

Wilson is very happy with where LGBT History Month is today, 22 years after he came up with the idea. “To gain a sense of empowerment, to understand those who came before us,” he says. “That’s the purpose, an annual reminder that a lot of people did a lot of work to bring us to the point where we are today. Those [contributions] are all pieces in this great puzzle, people put down a piece here and there and eventually it becomes a big picture.”