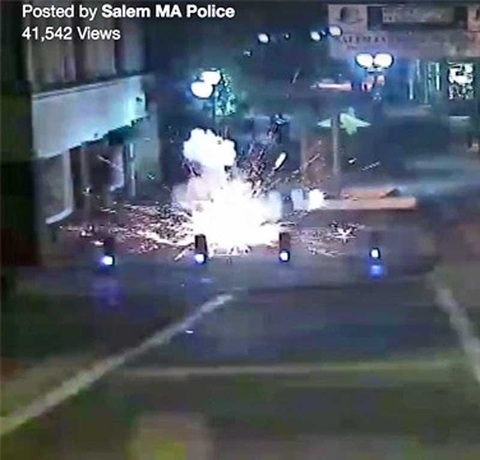 Salem, Mass. police are investigating a bomb exploded in the newspaper box of The Rainbow Times, the New England area’s largest LGBT newspaper. The bomb exploded early Tuesday morning; police report that the explosion was heard up to a mile away.

The placing of the bomb and its explosion were captured by a city owned surveillance camera, according to The Salem News. Salem Police Capt. Conrad Prosniewski said there were seven people, “all dressed in black” that placed the bomb. The Salem Newsreport quoted Prosniewski as saying, “Four of them walk around, three of them hang around, then all of them run off.

“’You see a little fire in the thing and then kaboom, there's a big explosion,’ he said. ‘One of our cruisers were on Laurel Street, and they heard it from there. It was pretty loud, generated a lot of calls to the police department.’

“Prosniewski said it's ‘kind of obvious to the video that the Rainbow Times was targeted for this vandalism.’"

Rainbow Times Editor in Chief Nicole Lashomb told the News that the incident was “shocking, to say the least.

"’It really shook me to the core, in the sense that you wouldn't expect something like that to happen in Salem,’ Lashomb said.

“Rainbow Times Publisher Gricel M. Ocasio, also a Salem resident, said she has ‘never, ever dealt with anything like this before.’"

Ocasio, writing on the Rainbow News’ website, said, “This act is something that affects Salem as a whole. We were dismayed and astounded by this vitriolic hate crime that happened to The Rainbow Times on Tuesday at 1:19 a.m. The Rainbow Times had experienced, for the past three months, various instances in which our news boxes in Salem were being vandalized. The acts were happening often enough that I believe we have close to 10 reports with the Salem PD. However, no one really expected the situation to escalate to this level.

“Hatred against our community and any other marginalized community happens everywhere and the progressive city of Salem isn’t an exception. In the current political climate, when a presidential candidate can use inflammatory words and actions—even encouraging violence—towards people of other backgrounds, races, ethnicities, religions, sexual orientations and other identities, then we must prepare ourselves for the inevitable consequences of such violent rhetoric. Most importantly, this is not just an act against The Rainbow Times or the LGBTQ community and its allies, but against the heart of Salem. Anyone could’ve been hurt by this irresponsible and cowardly act and we should all unite as a community to find the perpetrators.

“We, at The Rainbow Times, will not be censored. We will continue our diligent work and we will not be silenced by ignorance or hatred. In the meantime, we will have new boxes at the site of the explosion and will continue to work with the Salem Police Department, the Mayor’s Office and the community as a whole to stand against hatred of any kind.”

Police are labeling the incident as a hate crime, and have asked for the public’s help in identifying the seven individuals seen in the video.