LGBT survivors of domestic violence have fewer shelters and resources 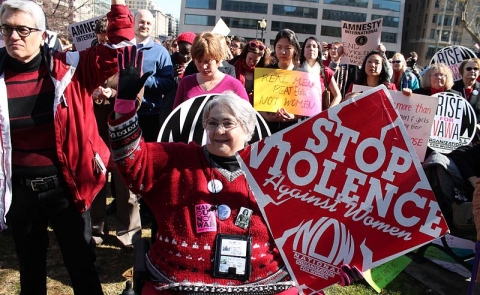 Domestic violence in the LGBT community remains a serious problem. Pictured above, a Valentine's Day 2013 protest against violence in Washington. Photo by Elvert Barnes.

People in same-sex relationships face intimate violence as often as straight people do – but the victim services available now are not enough to keep gay, lesbian and transgender people safe from their abusers, advocates say.

The National Intimate Partner and Sexual Violence survey included information about lesbian, gay, bi-sexual and transgender (LGBT) people for the first time this year. Analysis of the survey by the Centers for Disease Control and Prevention yielded some surprising statistics about intimate partner violence in same-sex relationships.

The data supports what has been apparent for some time, advocates say – the need for more services specifically for LGBT people.

Terra Slavin works for one of the few programs in the U.S. to offer services specifically to gay and lesbian survivors of domestic violence as the lead domestic violence attorney for the Los Angeles Gay and Lesbian Center. “We’ve really seen a sea change,” Slavin said of attitudes towards LGBT survivors of violence. “But we still have a long way to go.”

Slavin supports changes to the Violence Against Women Act, the landmark federal legislation to protect victims and prevent domestic and sexual violence that first passed in 1994. VAWA established the first national domestic violence hotline, the national shield law for rape victims, required states to enforce restraining orders issued in other states, established grants that funded shelters and services to victims of sexual assault and established funding for trainings to help police departments and other systems that have contact with victims to better respond to sexual and domestic violence.

The new version of VAWA, which passed in the Senate in February, adds protections for people in same-sex relationships and transgender people. The revisions would include LGBT people as an underserved group, prohibit service providers from discriminating based on gender identity or sexual orientation and provide grant money to be used for services for victims in same-sex relationships and transgender victims.

A bill with similar provisions also passed in the Senate last year, but then died when the House failed to pass it without Republican support. Republicans proposed another version of VAWA without protections for people in same-sex relationships and also stripped of proposed revisions intended to better protect undocumented immigrants and Native Americans. When that version died in the House, the Act, which usually enjoys bi-partisan support, failed to be renewed for the first time since it passed in 1994.

“Advocates of this provision haven’t produced data that shelters have refused to provide services for these reasons,” Senator Chuck Grassley, one of the co-sponsors of the Republican version of VAWA, said of the proposed protections for LGBT people in a statement. “The provision is a solution in search of a problem. Instead, it is only a political statement that shouldn’t be made on a bill that is designed to address actual needs of victims.”

The new provisions are essential to protect gays and lesbians, who face different challenges and have far fewer resources than women in heterosexual relationships, said Slavin, who also serves on the National Task Force to End Sexual and Domestic Violence. “We really do have gaps in service.”

Among them are the most basic needs for shelter. There are only a handful of domestic violence shelters in the country, for instance, that accept men, Slavin said.

“That is a huge problem when we talk about gay men who are in need of emergency housing,” said Susan Holt, who manages the STOP Partner Abuse/Domestic Violence Program at the Los Angeles Gay and Lesbian Center, which provides counseling and prevention services for LGBT survivors of domestic violence.

Transgender victims face particular challenges too. Slavin recalls one client, a transgender woman, who was asked to leave a shelter when staff realized she was transgender. “It’s hard enough to leave,” Slavin said of the woman’s decision to walk away from her abusive relationship. “This person fled. She got to a shelter, and she got kicked out.”

“It is very possible for the batterer to follow the victim to the shelter by presenting herself as a victim,” Holt said, adding that such scenarios are not uncommon in her experience. “There is no real screening process to prevent this,” she said, because the assessments issued to people coming to shelters assume that all women who arrive at shelters are victims rather than abusers.

Police officers responding to calls or victims who want to file reports also have trouble distinguishing the victim from the abuser in same-sex relationships. Rates of duel arrests, where both the victim and the abuser are arrested, are 30 times higher for same sex-couples than in cases with female victims and male offenders, according to the National Institute of Justice.

“I have had advocates tell me that if the cops show up and see two women, they just walk away,” Slavin said.

The way that VAWA is written makes it difficult to find funding for services for gay, lesbian and transgender victims of domestic violence, Slavin said. Thought much of VAWA is written in gender-neutral language, the section of the act authorizing Services Training Officers Prosecutors (STOP) grants specify that they end violence against women. They are therefore not easily accessible to LGBT-specific programs.

“It has allowed states not to fund LGBT programs because they theoretically would not serve mostly women” if they also accepted gay men, Slavin said. Some states, she added, have no services specifically for LGBT people.

STOP grants account for a significant portion of money given to states under the Violence Against Women Act. They have been used to train (.pdf) police and prosecutors to more effectively respond to cases of domestic violence and used to fund shelters.

The House is expected to vote on the Violence Against Women Act again this spring.