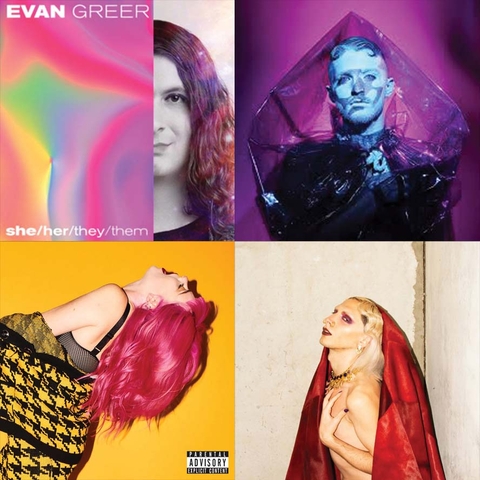 Over the course of 11 plucky, folk-laden tracks, Boston-based trans punk artist Evan Greer deals with topics as diverse as making out with boys at parties and mental illness. She comfortably employs the classic protest song method of using humor to ground otherwise dark themes in her music.

Not one to shy away from controversial topics, Greer also sings of how the LGBT community has failed to protect its most vulnerable members. And on Assimilation, she offers a bit of commentary on the modern trend toward gay normalization: “We don’t need gays in the military / We need militant gays!”

Throughout the politically-minded set, which was written over a decade of touring, Greer manages to reach a defiant fist skyward, yearning for a better world even without the guarantee of seeing it come to fruition.

Greer establishes herself with this album as an emergent voice, with an overdue message.

Former American nomad and current NYC-based artist Blew Velvet released and toured in support of three albums under the previous moniker SSTR. Now the queer singer-songwriter has embarked on a new project that blends the formula of 70s and 80s pop balladry with Americana and dark electronica.

Clocking in at nearly five and a half minutes, the hypnotic, seductive track begins with a swell of strings, which gradually gives way to staccato percussion and the artist’s haunting warble. A Sacrifice observes a relationship’s breakdown along with indictments of the self, as on lines like, “Without a plan I blame myself / Autonomy taken from me / A final thing, a sacrifice.”

The arpeggios and swirl of electronic synths, along with the cool, detached vocals, belies the full weight of the losses above.

Be sure to check out the stark, psychedelic music video that accompanies the song. An EP titled Frankie is due this summer.

GIRLI – Odd One Out

Combining the hard-driving synths of Dragonette with the brash immediacy of Elastica, Odd One Out slashes and stomps its way into your brain by way of nearly a dozen three-minute power pop explosions that are as repetitive as they are infectious.

The songs are fun, even if they suffer from somewhat clumsy songwriting. That said, they tend to lose their impact about halfway through. At times the songs feel more like a verse or hook that was simply repeated to full song length.

That’s not to say the album is bad; it’s not. But it’s neither groundbreaking nor great, either. If anything, GIRLI makes an ambitious statement with Odd One Out – but what exactly is the point?

On their newest single, Italian-born, London-based artist and LGBTQ+ activist, Andrea di Giovanni gets club-ready with a refreshingly unapologetic track about self-confidence. The artist told Gay Times Magazine that “Bang is a feel-good anthem aimed at every person who dares to live their truth; free from the boundaries of shame.”

Throwing out lines like, “I think I like it better when I’m on top,” di Giovanni drones over the song’s punchy percussion and buzzsaw synths, deftly employing vocal modulation to enhance the track’s already immediate, sexy nature.

In the equally fun accompanying music video, di Giovanni and a gaggle of colorful gender non-conforming characters preen and pose in the disco while the music bumps and grinds away in the night. It may be a tried-and-true genre, but gay dance music has rarely been this straightforward and fun.