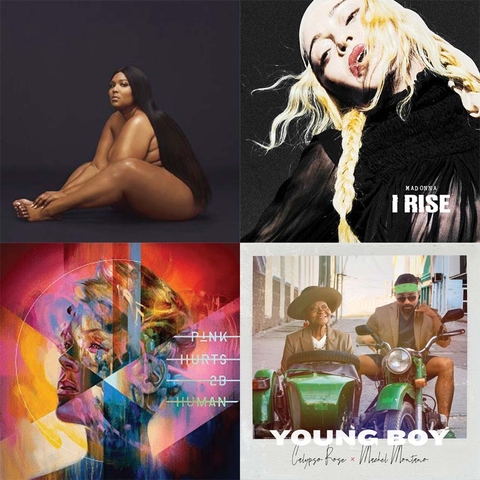 Lizzo – Cuz I Love You

On Twin Cities artist Lizzo’s new Atlantic album, she continues the onslaught of body-positivity that has been taking over the nation since her 2014 debut Lizzobangers. Previously introduced via booty-shaking hit single Juice, the album begins with the sultry and soulful title track, wherein our heroine dutifully tries to reinforce her claim to be “Aretha Franklin for the 2018 generation.”

As on previous releases, it’s really Lizzo’s voice that is the star here. Her infectious delivery and rabid inclusiveness promise to bring everyone to the table, and to the party. On Soulmate, she proclaims to be her very own “one,” while on Jerome she admonishes a trifling titular man.

Crybaby slinks along over a retro groove while Missy Elliott guests with a compelling verse on the anti-pop Tempo. Labelmate Gucci Mane shows up for Exactly How I Feel, another retro-leaning track that contains one of the album’s ubiquitous great hooks.

Just in time for Pride season, Queen Madge has given us the empowering ballad I Rise, an uplifting protest strummer that begins with a sample from Marjory Stoneman Douglas High School shooting survivor Emma González.

Ever one to court controversy without batting an eye, Madonna manages to address the nation’s epidemic of gun violence while also giving a nod to Stonewall, the watershed event in 1969 which gave birth to the country’s LGBTQ liberation movement.

The autotuned mid-tempo track follows lead single Medellín as the second of five tracks to be released ahead of the highly anticipated release of her 14th studio album, Madame X on June 14th, along with Crave, Future (featuring Quavo), and Dark Ballet.

Madonna sings, “There’s nothing you can do to me that hasn’t been done/Not bulletproof, shouldn’t have to run from a gun/River of tears ran dry, let ’em run/No game that you can play with me, I ain’t one.”

Pink’s eighth studio album was ushered in with the hit single Walk Me Home, a joyous track that recalls the band Fun. As well it should; the track was co-written by the group’s Nate Reuss.

Pink has made her mark as a sort of documentarian of her generation’s growing pains and best efforts, repeatedly making anthemic music that belies its dark subjects, such as drugs, depression and heartbreak.

Floor stomper Hustle warns any would-be grifters to mess with someone else while autotune and dance beats dominate (Hey Why) Miss You Sometime. Khalid does a guest spot on the raspy, heartfelt title track, while Pink recounts all the ways she’s guarded in the tugging My Attic.

Ever the underdog, Pink wrestles with emotion and rebels against authority and adulthood in a way listeners will immediately find familiar. While the album is quite a solid entry in her oeuvre, it’s ultimately well-trodden territory.

On the rhythmic track, Rose sings of the freedom of a woman after the death of her husband. “Who you looking for? Young Boy/You will cry no more, Young Boy/To spend yuh money, Young Boy/And call you honey, Young Boy.”

The song is addictive almost at once and sounds incredibly fresh; a glorious entry into the septuagenarian calypsonian’s astounding 64-year career, wherein she helped rewrite the boundaries of this energetic genre.

Originally protest music born from the British settlement of Trinidad and Tobago, Calypso is now often linked to celebrations around Carnival. Though she doesn’t address it much these days, Rose identified herself as gay in a 2012 interview. Her website states a new album is in the works.