Listen "Out" in August 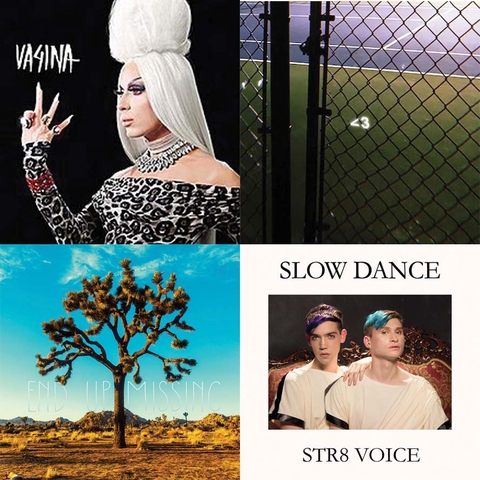 RuPaul’s Drag Race All Stars 2 champ and perennial pop culture favorite Alaska Thunderfuck has dropped the follow up to 2016’s Poundcake. Much like her first release, Anus, the new record exhibits a provocative title. She explained the title of the album is continuing to move through the chakras of the body, and added, “In the wake of the current political climate, where women’s bodies are being regulated and controlled by men, I think the title grabs people’s attention, and it’s a little dangerous. I like that.”

Much like her previous two efforts, Vagina features hard electronic beats, songs about taboo body parts, and lewd sexual acts, as well as a healthy dose of camp – what else could one expect? The title track pays homage to the portal of all life. Leopard Print demands that “everything must be” exactly that. With Everybody Wants to Fuck Me, she confesses, “I spend all night looking at pictures of myself.” Other tracks include Getting Kicked Out (Of Mickey’s On a Monday Night), Cellulite, Pride, and more.

Nightly – Talk You Down

Electropop trio Nightly has released their third EP, a captivating collection of four tracks and the follow up to their first release in 2016. The songs include No Call, No Reply; Twenty Something; Say Anything Else and Black Coffee. The album title comes from Twenty Something: “Talk you down, wasted on the couch. Say what you’re feeling now. Don’t hold back. Spell it out.”

Each track on the EP and details relationship dynamics to which many listeners will relate. The music on Talk You Down provides a unique intimacy couched in dreamy synths and punchy beats. With soothing vocals and introspective lyrics, Nightly have created a solid release that will have fans salivating for more.

The Nashville-based band is comprised of cousins Jonathan Capeci and Joey Beretta, with Nick Sainato on drums.

NYC artist and Australian native Yanni Burton’s newest single is a tale of heartache told through the stages of a relationship’s breakdown, from the passion and lust of newfound love to the detritus left in its wake. Despite the club-ready vibe of the dance track, End Up Missing is earnest in its attempts to capture a moment in Burton’s life. He wrote the track at a time in his life when he was staying out late with friends and getting lost in dance music and club culture.

He sings, “Lately I can’t seem to find my way back home to you. And I don’t even recognize myself right next to you. But baby you’re the only thrill I end up missing.” The lush dancefloor filler is accompanied by a gorgeous winter desert-themed music video. This exciting artist is definitely one to check out.

Gen Z isn’t afraid to rend antiquated social constructs asunder, and it shows crystal clear on tracks like Slow Dance’s newest, Str8 Voice. Alex Ryan and Jacob Chabon give the finger to toxic masculinity with a healthy dose of humor and their signature brand of perfect 80s synth pop.

The pair, who also happens to be a couple – who met on Tinder, also serves up a hilariously camp and lighthearted video to accompany the song. They list Slow Dance as a project that stems from a passion and deep interest in synth-pop and mutual experiences growing up as gay men. Watch out for this dynamic duo!