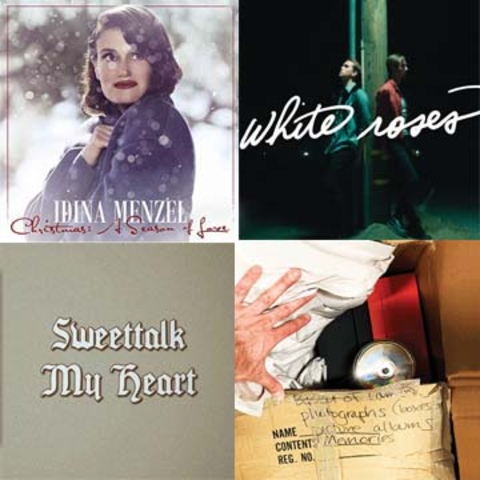 The Let It Go Tony-winner is back, and not only with Frozen 2, but also a new holiday album, and she’s joined by some very special guests.

Along with former Wicked co-star (and Oklahoma’s own) Kristin Chenoweth, Ariana Grande joins in for an original duet called A Hand for Mrs. Claus, written by Let It Go songwriters Robert Lopez and Kristin Anderson-Lopez.

As well, the singer joins forces with Pose star Billy Porter for I Got My Love to Keep Me Warm, husband Aaron Lohr on I’ll Be Home for Christmas, and her Frozen co-star Josh Gad on We Wish You the Merriest.

The album also includes a stirring rendition of Seasons of Love from her breakthrough role in the musical Rent, as well as a tribute to her Jewish roots on Ocho Kandelikas, a Hanukkah song sung in Ladino, the ancient language of Sephardic Jews.

Look for more from Menzel as she reprises her role as Queen Elsa in Frozen 2, out now!

Tulsa native Greyson Chance is back with a compelling new song about the emotional tumult that occurs when the veil of secrecy is lifted for a man who hides his true identity from his loved ones.

The powerful track features lyrics like “White roses on a pastel sky / Broken vows on our lips run dry / I see you out with your friends, you smile / It’s funny how that goes, I haven’t slept in a while.”

He pleads with the song’s subject, “Darling, be careful with me / ‘Cause there’s part of me that you don’t know / Darling be gentle with me / When you tell me that you need to go.”

Chance describes the resultant music video as a mini-movie, and says of the clip, “Just like the world around them, each character in the video is likewise broken.”

The song is the latest single from his album Portraits.

Swedish pop star Tove Lo has released her latest single, Sweettalk My Heart, which she calls her “happy love song.”

In a press release for the single – the fourth from her latest album, Sunshine Kitty, she says, “In a way, I’m asking the person I love to lie to me; promise things we both know we can’t know if we can keep. Because nobody knows the future. But it’s about believing what you’re both feeling in the present – that you’ll love each other forever. It might be naïve, but I think that’s good. Being realistic about love makes it impossible to fully feel it.”

Indeed, the singer is well aware of all the potential pitfalls that could harm the relationship but still manages to operate under the belief that kind, loving words can overcome such travails. In a way, she actually perceives the “sweet talk” to be more important than the romance itself.

The track is accompanied by a stylish video that features the singer having an out-of-body experience.

Los Angeles superstar group Maroon 5 is back with a touching and heartfelt tribute to their friend and late manager, Jordan Feldstein.

Feldstein – brother of actors Jonah Hill and Beanie Feldstein – died suddenly in December 2017 at just 40 years old from a blood clot, which caused a pulmonary embolism. He and the band’s lead singer Adam Levine grew up together. Levine recently told Variety that Feldstein’s death was “a tragedy foisted upon us and far and away one of the saddest moments of our lives.”

The song became the band’s 22nd Top 40 hit and is their first since 2017’s Girls Like You. The band also memorialized their fallen friend in an emotional, and sparse video, which is reminiscent of Sinead O’Connor’s 1990 smash hit Nothing Compares 2 U. In the video, we see Levine visibly choke up as the camera pans away from him at one point, letting the song simply play as he composes himself. At the end of the clip, the words, “For Jordi” appear on screen.