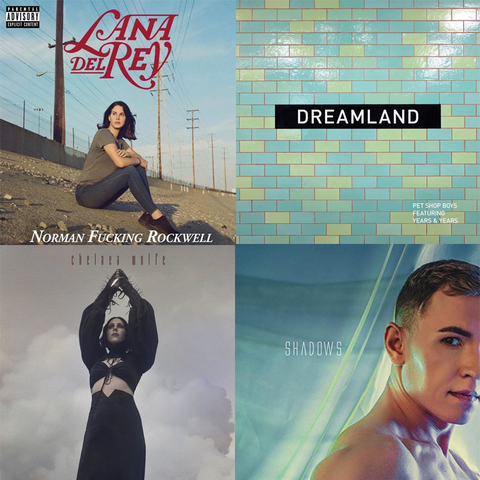 Lana traded in her gangsta Nancy Sinatra persona for California sad girl rock and apple pie Americana, stars and stripes background and all. She actually stopped performing in front of an image of the American flag in 2017. And on NFR! she has traded her woozy homages to Marilyn and Elvis for narratives on the cultural zeitgeist.

On this release, she establishes herself as one of America’s premier songwriters, and there are echoes of and comparisons to Dylan, Joni Mitchell, Carole King, and Lou Reed throughout the set. Rather than romanticizing America, she’s looking for it on NFR!

The album’s centerpiece is the nine-and-a-half-minute epic (and previous single) Venice Bitch, wherein she sings about being “fresh out of fucks forever.” And just like the album’s opening words, “God damn, man child,” it manages to capture the national mood.

Dance legends Neil Tennant and Chris Lowe are back with a glorious new single from their as-yet-untitled forthcoming album, due January 24th. The disco-inspired single is a duet between Tennant and Olly Alexander of the aughts English synthpop group Years & Years.

“Dreamland, I dream of you all night and day / Dreamland, I need you, I close my eyes, and you lead the way,” Olly croons over a thumping beat and a crescendo of synths. His blue-eyed soul voice and Tennant’s nasally whine may seem to be strange partners, but they blend surprisingly well.

This single is a delicious taste of what fans have been waiting for since 2016’s Super. The forthcoming album has been enticingly described as “the third part of a Stuart Price-produced trilogy which started with Electric in 2013 and continued with Super in 2016.”

Queen of California gloom Chelsea Wolfe has returned with her highly-anticipated follow up to 2017’s Hiss Spun.

Wolfe’s ethereal vocals permeate the dense gothic fog of tracks like American Darkness and the haunting title track, which is equal parts PJ Harvey and Mazzy Star, with a dose of Tanya Donelly thrown in for good measure.

Wolfe wrote Birth of Violence at her isolated Northern California home, surrounded by misty redwood groves. It’s appropriate, given the “back to the land” vibe of the album. As such, Birth is folkier than the doom metal sludge of Hiss Spun, written (like its predecessor Abyss) during periods of intense touring for Wolfe.

The album might be best described as a doom folk opus. It’s simultaneously a departure and a return for Wolfe. She pulls the earth around her in its more delicate song structures and quieter aesthetics. Ultimately, however, the album as a whole becomes somewhat indistinguishable in its parts.

“This creepy heart of mine always falls for another lie,” Alx Luke sings on his catchy new single Shadows. His sweet vocals flow effortlessly over a building verse-chorus-verse structure which finds the verses almost quiet folk-pop, with a danceable and edgy chorus. “I’m falling into shadows that crawl in the night / Yeah only in the shadows do I come alive,” he sings over a grinding, punchy beat. The song is a great introduction to Luke that will make listeners hungry for more.