"Listen Out" music reviews for February 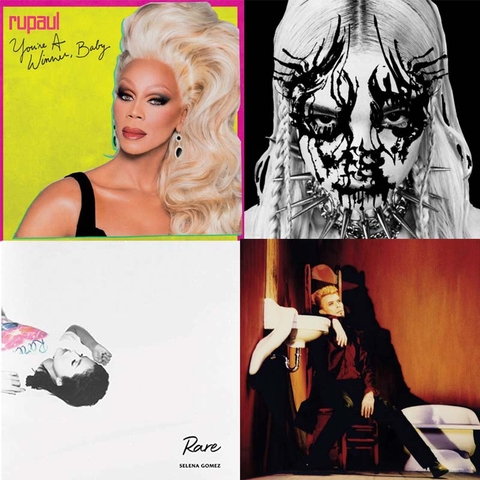 RuPaul – You're a Winner, Baby

Drag legend and queen of all media RuPaul has released a new collection of original material, not-so-coincidentally on the same day as his new Netflix starring vehicle AJ & the Queen.

As a whole album, the eight-track twenty-five-minute set feels mostly like filler material driven purely by the need to have fresh content on the market, to tie in with the aforementioned new show.

That said, the album does have a few good tracks, like opener London, I’m a Winner, Baby, and Super Sexy Lady, which is a retro slice of 80s synth-R&B heaven and features a clip of Drag Race alum Latrice Royale. Blessed is an uplifting gratitude toe-tapper, though not among Ru’s best tracks. The album ends with the quite good Kummerspeck Redux remix Ruby Is Red Hot, a nod to his AJ & the Queen character Ruby Red.

Skip the totally unnecessary Birthday Song and the vapid Condragulations.

Satirical YouTube sensation Poppy continues the rapid evolution she’s seen since her 2017 debut Poppy.Computer, a bubblegum confection the worked alongside her online videos, and the 2018 follow-up Am I a Girl? - an album that questioned identity, celebrity, and climate change through electropop, save the closing track X, which added metal to Poppy’s ever-growing repertoire, and paved the way for I Disagree.

The new album is an eclectic, heavy, and weird collection of nu-metal, pop-metal, and industrial-lite that sees our bonkers heroine tackling destruction and creation, and how those different visions fit together. Ultimately, it’s a record about understanding who you are.

One of the album’s strongest moments comes in the fearless, and epic closer Don’t Go Outside, in which Poppy defies the very idea we should be afraid, arguing against all hope that “everything will be okay.”

Listeners will be pleased to find it was worth the wait. Like Gomez’s best material, the album is deftly produced and shows all the right restraint where it needs to while managing to be a smart, grown-up pop record in the process.

Aside from the heaviness of Gomez’s recent first #1 hit Lose You to Love Me, the rest of Rare errs on the breezy side, though it occasionally alludes to her rocky past. The album also includes the 80s flavored, slinky new hit Vulnerable.

Other standouts include Dance Again, Look At Her Now, and People You Know.

6LACK and Kid Cudi guest on Crowded Room and A Sweeter Place, respectively.

David Bowie – The Man Who Sold the World (ChangesNowBowie Version)

Released just two days after what would have been the rock legend’s 73rd birthday, this previously unreleased version of his 1970 classic The Man Who Sold the World was recorded during the ChangesNowBowie sessions in 1996. The set aired on the BBC on January 8, 2017, to coincide with Bowie’s 50th birthday.

The rare acoustic version is the first taste of Parlophone Records’ recent announcement of two posthumous projects from the late superstar. It’s the first track from the forthcoming six-track EP Is It Any Wonder. This lighter version of the classic will also appear on a nine-track record comprising the rest of the ChangesNowBowie sessions, which will be released as a limited-edition LP and CD for Record Store Day, April 18.

A guitar synth mimics a sitar and takes center stage, allowing Bowie to be unencumbered by cacophonous eclectic percussion. It’s a fresh take on the original, which allows it more room to breathe.