Longtime US residents, aspiring citizens caught up in ban 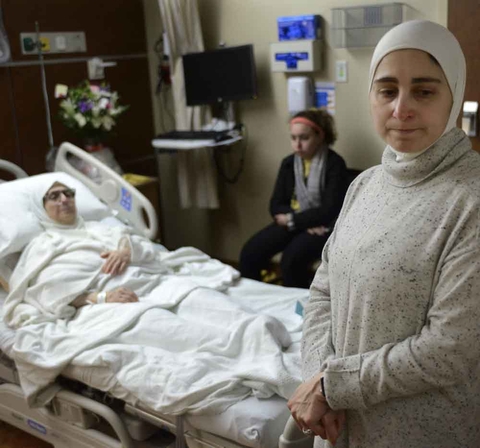 Nour Ulayyet foreground, looks on after her sister Sahar Algonaimi was not permitted to enter the United States to help care for their mother Isaaf Jamal Eddin at Munster Community Hospital. AP Photo, Paul Beaty.

Los Angeles (AP) — A woman traveling to Indiana to care for her cancer-stricken mother, a family physician who has lived in the U.S. for two decades, and a Minneapolis woman about to become a U.S. citizen were among those caught in the net cast by President Donald Trump when he banned travelers from entering the country from Muslim-majority nations.

Here are their stories:

Sahar Algonaimi, a 59-year-old Syrian woman, was coming to the U.S. to care for her cancer-stricken mother when she was put on a plane Saturday and sent back to Saudi Arabia hours after arriving at Chicago's O'Hare International Airport.

When her mother became ill, Algonaimi's sister, Nour Ulayyet, asked her to come to their home in Valparaiso, Indiana, to help take care of her. Algonaimi had visited just last year and still had a U.S. visa good until June 2018.

After texting to say her plane had touched down, she never arrived at the gate. A man identifying himself as an immigration officer eventually called Ulayyet to say her sister was being sent back to Saudi Arabia, where she teaches school. When Ulayyet asked why, he cited the president's executive order.

"I asked if I could speak to a supervisor," Ulayyet said. "He was very nice, very sympathetic, but he said, 'Literally for me to help I'm going to be breaking the law and I'm not going to break the law.'"

Dr. Sarwa Aldoori, a family physician from Bakersfield, California, was returning home Saturday from an eight-day religious pilgrimage to Saudi Arabia when she was startled to be pulled aside from the rest of her group.

"Everything was OK until I got to the customs checking point and my colleagues and friends went through and the guy looked at my passport and eyed me and he said step aside," Aldoori said Sunday, her voice shaking as she tearfully described the ordeal.

She was released and reunited with her husband after nine hours.

Aldoori, a legal permanent resident of the U.S., said she made a similar pilgrimage to Saudi Arabia last year — "a very special visit in the life of every Muslim" — without incident.

As she cried and asked to know why she couldn't leave the airport this time, the doctor, who has lived in the United States since 1996, said an officer finally told her, "It's because you were born in Iraq," she said.

"I looked at him and I said, 'You know, I am 62 years old. What did I do wrong?' He didn't say anything, he just looked at the floor and said have a seat."

Although angry and shaken, she said she still plans to eventually become a U.S. citizen.

"I'm not going to let something like that stop me," she said defiantly. "We used to have decent people in government and now we don't."

Fateme Farmad was returning from Iran to her Minneapolis home with her 11-month-old son when she was detained and questioned for more than 12 hours at Los Angeles International Airport.

Farmad and her family had traveled to Iran last month to visit relatives and her husband, Masoud Samet, had returned home without incident on Jan. 6. She stayed with other family members to attend a wedding.

When the group arrived Saturday, her brother, a U.S. citizen, was immediately allowed back in. She and her mother and her son were held.

"They are OK, but they are very tired and the situation was unexpected and very horrible," said her husband.

Attorneys who filed legal action demanding Farmad's release accused officials at the airport of attempting to coerce her into signing papers relinquishing her permanent resident status.

Farmad, who has lived in the United States for five years, is scheduled to take her oath of citizenship on Feb. 13.