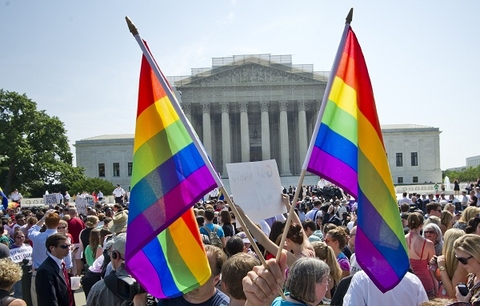 A Senate judiciary committee voted 4-1 against the proposal by Sen. J.P. Morrell, a New Orleans Democrat who said the legislation would clean up Louisiana's statutes to comply with "the law of the land."

"Though the subject matter can be controversial, the law is irrefutable," Morrell said.

The Louisiana Family Forum, a conservative Christian organization that carries significant sway with some lawmakers, objected to the proposed changes.

Organization president Gene Mills said current language referencing a husband and wife and describing marriage as a "between a man and a woman" reflects the view of a majority of Louisiana's citizens and offers an "educational and historical perspective." He said Louisiana has followed the Supreme Court ruling and didn't need Morrell's bill.

"Compliance is dramatically different than redefining marriage in order to align with a fallible opinion of a court," Mills said.

Morrell replied that people who wanted to keep state bans on interracial marriage made the same arguments after the Supreme Court's 1967 decision striking down such prohibitions.

"You cannot selectively decide which Supreme Court cases you like and you don't," Morrell said. He added about same-sex marriage: "This is the law of the land whether you like it or not."

Morrell's bill was recommended by the nonpartisan Louisiana State Law Institute, which studies complex legal issues for the Legislature.

Sen. Rick Ward, chairman of the Senate Judiciary A Committee, noted that the institute recently developed a list of Louisiana state laws deemed unconstitutional but still on the books. Ward said that list was 77 pages. For example, lawmakers have repeatedly refused to repeal an unconstitutional law that required teaching creationism in science classes.