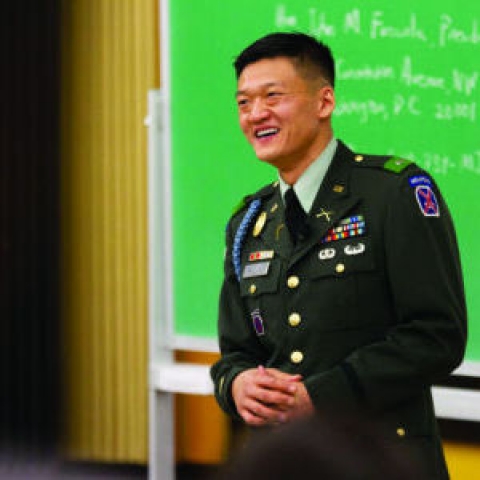 Special to the Gayly

Lt. Dan Choi, who was discharged from the military after his “coming out” on the Rachel Maddow show in March 2009, spoke to a group of around 300 students, faculty, staff and community members at Wichita State University Tuesday night about his experience in the military and his work since he was discharged.

Natalie Toney of the Office of Multicultural Affairs introduced Choi.

“We worked tirelessly to get him here,” Toney said. “He was supposed to come last semester, but Hurricane Sandy said no.”

Toney said Choi has been arrested several times for protesting in front of the White House, and has always pleaded “not guilty” in court, and he always represented himself. After mentioning that Choi’s favorite places to visit were Russia and Wichita, Toney introduced Choi to the audience, who cheered for a full minute before allowing him to speak.

Choi began his speech by talking about some of his experiences in the military, including reactions of his fellow troops after he came out.

Choi said the reason he came out is that his mother kept asking him when he was going to get married to a woman. Through jokes he made as he spoke, he said that after he came out to his mother she had an interesting reaction.

Choi’s father, a Southern Baptist Minister, could not come to terms with Choi’s sexuality. Because of his parents’ views on his lifestyle, Choi has severed contact with his parents.

“The last time I talked to them, it was a difficult conversation because they were saying they would protest my gay wedding,” Choi said. “And they said I’m a shame on the entire family. I couldn’t deal with that anymore. Sometimes you have to play tough love because if your parents really love you, then they will learn to love you unconditionally.”

As he continued with his speech, Choi talked about the now repealed Don’t Ask, Don’t Tell policy, which prohibited gay and lesbian individuals from serving openly in the armed forces. He said at first, he thought DADT was honorable because as long as he kept quiet, he could continue to serve. The thing that changed his mind: falling in love.

“I finally understood what all you straight people talk about all the time,” Choi said. “I knew that at the end of the day, I would have someone who loved me unconditionally. I learned that love is worth fighting for.”

Near the end of his speech, Choi had everyone in the room stand up, and make a proclamation, one that he wanted to be heard even by people not in the building.

“I am somebody,” the group shouted. “I deserve full equality right here, right now. I am somebody.”

A question and answer session followed Choi’s speech. One person asked what Choi plans to do when the Supreme Court decision regarding marriage equality is handed down.

Freshman Megan Roser, a nursing major, attended Choi’s speech. She said her religion has changed, but her love and faith in what she believes have not.

“I would speak at the Supreme Court hearings if I could because no matter how you look at it, we are all the same in one way or another,” she said.

“He has such enthusiasm and charisma. It was just amazing,” Laham said.

Another member of That Gay Group, graduate student Darren Schmitz, said Choi had pearls of wisdom in his speech.

“I think one thing that stands out in particular is when he said it has to get worse before it gets better, and it’s just something I have to keep in mind when the Supreme Court releases their ruling next June: that no matter what the outcome is, to remember that if it gets worse, it can always get better,” Schmitz said.

Toney, too, was impressed with Choi’s speech.

“I am kind of speechless,” Toney said. “I’ve been told by people that he’s an amazing speaker, but it’s nothing like experiencing it for yourself. He was relatable, he was honest, brutally honest, and I love that about him. He was funny, and he was just all around moving. It was amazing.”