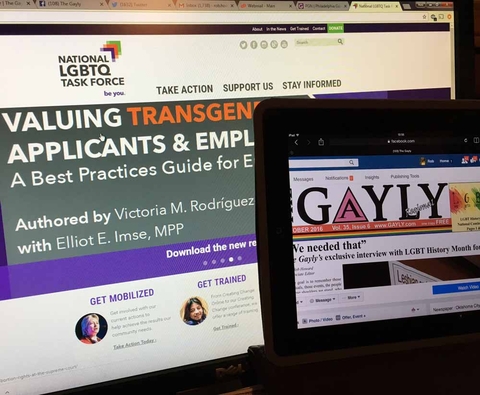 Mass media communication began with writing on cave walls and grew to handwritten manuscripts, to the invention of the printing press, newspapers, radio, television and now the Internet. Photo by Rob Howard.

After researching LGBTQ history, thinking about my own journey to where I am today in 2016 as an open gay Christian, I have written this column from a different perspective. I have only been officially part of the LGBTQ rights movement for three years.

2015 inspired me. Mass media allowed the world to watch the Supreme Court make LGBTQ marriage legal in the United States. This column will focus on the power of the media and how we can keep the LGBTQ movement growing.

Here are a few historical media facts to think about:

1836: The last known execution for homosexuals occurred in Britain.

1913: The word “faggot” first used in print media to reference gays in a vocabulary of criminal slang published in Portland, Oregon.

1969: The Stonewall riots took place in New York and today’s Pride Marches are often held to commemorate that event.

1994: LGBT History Month was founded in the Unites States.

I realize that I left many events off, but my point is that countless events have also been left out of our history books and mass media over the years. I understand how media has evolved along with historical events and the media tools they had to communicate to the masses.

Mass media communication began with writing on cave walls and grew to handwritten manuscripts, to the invention of the printing press, newspapers, radio, television and now the Internet.

With each mass media invention, we have witnessed more historical messages shared publicly. Mass media messages have been molded mirroring what is happening in our world. The bigger story topics began to connect to advertising dollars. Money talks and it has controlled what we learn from mass media.

The church and white educated men controlled money in early years of history. Schools began in churches and only white males with money could attend the church schools and learn to read. This has impacted mass media from the start and today I wonder if we are finally breaking this unfortunate cycle.

Our world has been manipulated to care about things that mass media tells us we should care about. If the LGBTQ community wants to influence history and media, we can begin by organizing movements to financially support businesses, services, schools, churches, and other companies that are willing to accept the fact that LBGTQ people are equals.

Businesses have a right to serve customers they want and we have the right to support companies that we trust, respect and want to see impacted by our dollars. We have more control today than back in 54 A.D. Let’s work together to help make our world a better place for all humanity. We have more power than we have ever had and we can make a difference together for future generations.