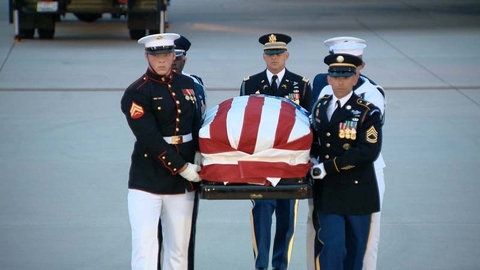 He was a war hero who survived more than five years of torture as a prisoner in Vietnam and the 2008 Republican presidential nominee, but it's John McCain's role as a legislator that may have most defined his public life.

A two-term congressman and a senator for more than three decades, McCain shaped US policy on everything from immigration to foreign policy, spoke out against the country's use of enhanced interrogation practices during the George W. Bush administration and irrevocably changed the very body in which he served.

On Friday, McCain came home to the Senate one last time, becoming only the 31st person to lie in state in the US Capitol, a rare honor reserved for government officials and military officers. While minutes before the sun had shone over the dome, as McCain, carried by an honor guard, ascended the steps, the clouds opened and rain poured down.

Shortly before 11 a.m., McCain's body entered the Capitol Rotunda. They set the casket atop President Abraham Lincoln's catafalque, a wooden structure that has been used in several ceremonies in past years and McCain's former colleagues looked on.

Senate Majority Leader Mitch McConnell, a man who at times fought on the opposite side of McCain on issues such as campaign finance, remembered him as a tough political opponent.

"He had America's fighting spirit," McConnell remembered. "I will miss a dear friend whose smile reminded us that service is a privilege."

House Speaker Paul Ryan remembered McCain as a man who made a "tremendous difference," " a man of conviction" and a "man of state."

"What stands out about John McCain is what he stood for," Ryan said. "No one was stronger at the broken places than John McCain."

Pence said that President Donald Trump -- a man who was not invited to services for McCain -- asked him to be there.

Following that, bipartisan leaders -- McConnell and Senate Minority Leader Chuck Schumer and Ryan and House Democratic leader Nancy Pelosi -- presented wreaths. Republicans and Democrats leaders stood side by side as they laid them, the way McCain wanted it.

In recent days, McCain has been eulogized and remembered by Republicans and Democrats alike. He has been celebrated for his ability to reach across the aisle and at times buck his own party, as he did in the summer of 2017 when a simple thumbs down stopped Republicans from moving forward with a plan that would have advanced a partial repeal of the Affordable Care Act.

On Thursday, Vice President Joe Biden, a Democrat who shared a presidential ticket with a man who beat McCain, remembered his former Senate colleague as one of the fiercest defenders of the Senate.

After Friday's Capitol ceremony, the public is invited to pay their respects to McCain. On Saturday, a memorial service will be held at the National Cathedral, where former Presidents Bush, a Republican, and Barack Obama, a Democrat, will speak.

McCain relished his time in Congress, a place he had not returned to since December 2017 as he fought brain cancer. In his final message to the American public, McCain celebrated the honor that serving had been.

"Thank you for the privilege of serving you and for the rewarding life that service in uniform and in public office has allowed me to lead. I have tried to serve our country honorably. I have made mistakes, but I hope my love for America will be weighed favorably against them," he wrote.