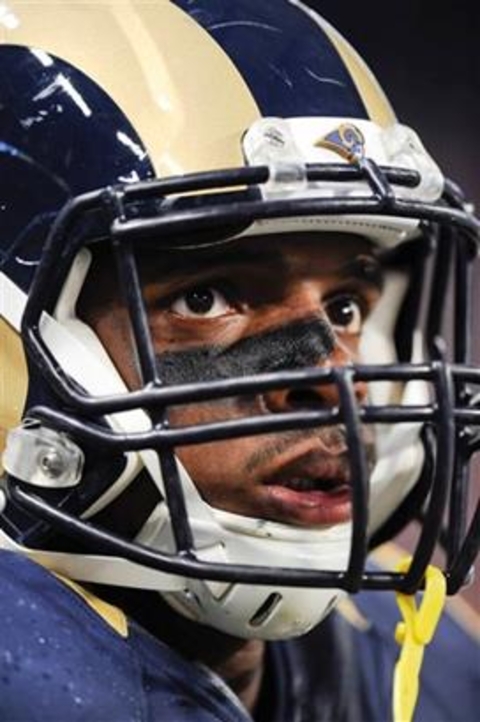 St. Louis Rams defensive end Michael Sam looks up at the scoreboard in the first quarter of a preseason NFL football game between the Rams and the New Orleans Saints on Friday night in St. Louis. (AP Photo/L.G. Patterson)

Coach Jeff Fisher said that's where the first openly gay player drafted in the NFL will have his best shot at making the team.

"Michael is a defensive end, OK? He plays defensive end with his hand down," Fisher said after a 26-24 loss to the New Orleans Saints on Friday night.

"There's a lot of talk with Mike being a 'tweener,' maybe a standup pass rusher. It's rare to find a defensive end playing special teams in the NFL."

Sam said his introduction to the NFL was "awesome," recalling thinking during the national anthem, "Wow, this is the big stage."

But not too big.

Sam, who was credited with one tackle and one quarterback hit, emerged with confidence.

Sam was a seventh-round draft pick and he's attempting to launch his pro career a two-hour drive from where he starred on a 12-win Missouri team that played in the SEC title game last season.

Sam shed weight to 257 pounds coming into training camp so he'd be a viable special teams option on a team that already has a strong pass rush.

Mark Ingram had eight carries for 83 yards and a 22-yard touchdown in the first half.

"We wanted to come out here and start fast," Ingram said. "The line was just physical up front, got a lot of movement off the ball and created a lot of seams and holes for us to run through."

Luke McCown started in place of Brees, limited by a left oblique injury for a week. First-round pick Brandin Cooks caught a 25-yard touchdown pass from third-stringer Ryan Griffin in the third quarter and had five receptions for 55 yards.

"I know what I'm coming into," Cooks said. "I'm coming in with a great group of receivers. I've got to come in and find my spot."

Coach Sean Payton was non-committal about Brees' chances of playing next Friday at home against the Titans.

"We'll be smart with his recovery. He certainly is smart enough, too," Payton said. "Look, it is an area that is affected every time that you throw, so it's important that it is 100 percent."

Bradford was held out as a precaution coming off knee surgery. Shaun Hill got the start and threw two touchdown passes in the first half.

Greg Zuerlein was barely wide left on a 59-yard field goal attempt on the final play after missing a 46-yard attempt with just under six minutes remaining.

The stadium appeared to be at less than half capacity not long after the opening kickoff and dwindled to perhaps one-third by the finish for the matchup between the Rams, who've had consecutive seven-win seasons under Fisher, and the 11-win Saints.

Sam began playing on the next series and made two nice plays in the second quarter, pressuring Griffin into an incompletion and getting a tackle.

"He's unpolished like a lot of rookies," Long said of Sam. "But he pleasantly surprised you when he went out in a game situation and played pretty well."

Saints kicker Shayne Graham botched an extra-point kick from the longer distance being used the first two weeks of the preseason, hooking it off the left crossbar in the second quarter.