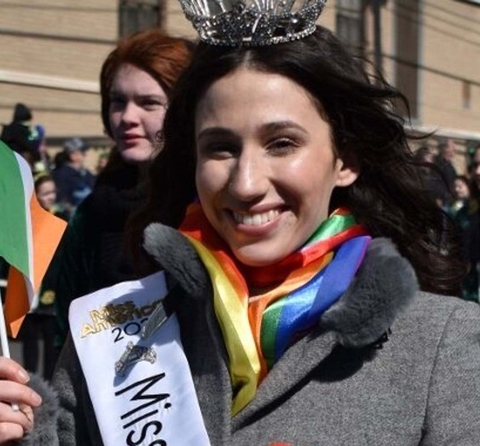 When Miss Staten Island came out as bisexual, she was ready to walk in her borough's St. Patrick's Day parade the next day dressed up in rainbow colors.

Instead, hours after she came out to the New York Post on Saturday, Madison L'Insalata, 23, received a call from Jim Smith, the director of Miss Staten Island Scholarship Pageants, telling her she'd been banned from Sunday's parade by the parade organizer.

"I did not see that coming at all," L'Insalata told CNN. "It was a curveball. But when I heard it, I was shocked and a bit upset."

Smith told CNN he did not know L'Insalata was coming out as bisexual, so he was surprised to receive Cummings' call -- but he was not surprised by his decision.

"I knew nobody would change his mind," Smith told CNN. "So I had to call the girls and tell them. It was very difficult to tell them. I felt screwed. This was one of the biggest events of the year in Staten Island."

Cummings did not respond to CNN's request for comment. Further calls went directly to his voicemail.

"The New York City Police Department is in charge of the safety of the people here marching at the parade," McMahon told the Staten Island Advance. "I trust them. I would leave that for them to decide, and I don't think that's really a very valid argument."

Others barred from marching

Miss Staten Island and her fellow pageant girls were not the only ones banned from the parade.

New York City Councilman Joseph Borelli, whose district includes part of Staten Island, said he was not allowed to march in the parade because he was wearing a pride pin.

"I wanted to wear a tiny pin to express solidarity, but the parade officials physically blocked me and stood in my way. They said I can't march with the rainbow," Borelli told CNN.

"Sixty-year-old men acting childish -- want to be tough guys who can't get past my pin. It's a shame. These are people making out the rules for no reason."

The Pride Center of Staten Island has applied to attend the parade for the past decade but says Cummings has rejected them every year.

"The first two years, Larry Cummings said we go against the tenets of the Catholic church," Pride Center executive director Carol Bullock said. "This year he flat out said it's not a sexual identification parade."

Although Bullock has asked to speak to the official who made that decision, she said they declined. Their "discriminatory" decision to ban L'Insalata from marching in the parade "sends a horrible message" to youth and the community, she said.

St. Patrick's Day is a cultural and religious celebration of one of Ireland's patron saints, St. Patrick, who is responsible for converting the people of Ireland to Christianity.

Several politicians have boycotted the Staten Island parade to protest the organizers' refusal to allow LGBT communities to march.

Petition to remove the parade organizer

Despite being banned from marching in the parade, L'Insalata didn't let it stop her from attending.

She showed up on the sidelines smiling in her sash, tiara and rainbow scarf.

"By banning me, Larry Cummings has given himself less power," L'Insalata said. "I feel great right now. I feel happy. I am excited."

A petition to remove Cummings from Staten Island's St. Patrick's Day Parade was started Sunday and had garnered nearly 5,000 signatures by Monday night.

"Of course I love that there is a petition to remove him but in an ideal world I would like to see him come and talk to us," L'Insalata told CNN.

"This whole thing has been hostile since the beginning. I want to see him talk to the LGBTQ community in a respectful way. I would love to see him allow the Pride Center to walk. It's not about him or his personal beliefs. It's his community."