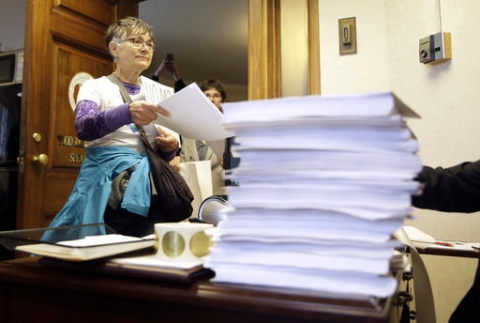 JEFFERSON CITY, Mo. (AP) — A Missouri religious objections proposal failed on Wednesday to get the approval of a key legislative committee in a setback for conservatives who hoped to add protections for those who cite their faith in denying services such as flowers or cakes for same-sex weddings.

Members of a House committee voted 6-6, with a tie vote not enough to advance the measure. The committee's Republican chairman Rep. Elijah Haahr said it still has a chance to succeed if one of the lawmakers who voted against it in committee changes sides and asks for another vote. After that, it would need approval from a second committee before it could head to the House floor for debate. The legislation previously passed the Senate following a 37-hour filibuster by Democrats.

At issue was a proposed constitutional amendment to bar government penalties against businesses that cite religion while denying goods and services of "expressional or artistic creation" for same-sex weddings. If passed by the Legislature, it would head to a referendum of voters this year.

Supporters argued it's needed to shield businesses from being forced to provide services that violate their religious beliefs following the U.S. Supreme Court ruling last year legalizing marriage of same-sex couples in all states.

The Missouri Baptist Convention and Missouri Alliance for Freedom, which advocates for individual liberties, backed the proposal.

But it drew opposition from some of the state's top corporate names, including agricultural giant Monsanto, brewer Anheuser-Busch and prescription drug benefits manager Express Scripts.

Critics cited economic fallout in states with laws perceived by some as discriminating against lesbian, gay, bisexual and transgender people, although Republican sponsor Sen. Bob Onder argues his proposal is narrower than measures passed in other states.

Following North Carolina's passage of a bill banning local protections for LGBT people that also included transgender bathroom use, big corporations including online payments company PayPal and entertainment conglomerate Lionsgate canceled plans to do business in the state. Rock star Bruce Springsteen is among a growing list of musicians to cancel concerts in the state in response.

The Missouri legislation did not deal with transgender bathroom access.

Lawmakers face a May 13 deadline to pass legislation.

SUMMER BALLENTINE, Associated Press. Copyright 2016 The Associated Press.
All rights reserved. This material may not be published, broadcast, rewritten or redistributed.
The Gayly - 4/27/2016 @ 2:32 p.m. CDT