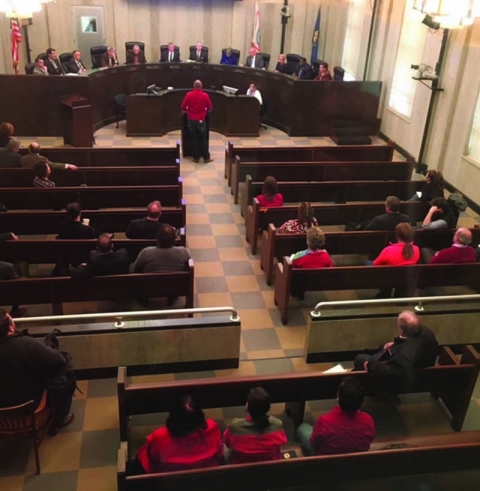 In a bold proposal today, Ed Shadid, of Ward 2 of the OKC City Council, moved for approval for amendments to Section IX E. 1 and 2, which are as follows:

ix. E. 1. Amendment to Ordinance relating to Human Rights, Chapter 25, Section 25-39, to include sexual orientation and gender identity as a protected class in housing market.

The discussion that took place today in the City Council began with the fact that the majority of cities in the US have Human Resources Commissions. Some even receive support and funding from the federal government. But, although Lawton, Norman and Tulsa have Human Rights Commissions, Oklahoma City does not.

The first citizen to speak to the Council was Phillip Douglas, a retired Christian minister who wore red to show solidarity for the gay community. “I want my city to be known as a nondiscriminating and fair place,” he said.

Troy Stevenson, Executive Director of Freedom Oklahoma, spoke to the Council stating, “Oklahoma City ranks one of the lowest in protections for the LGBT community,” he said. “We lack protections for employment and public spaces. We could be kicked out of a restaurant for being lesbian, gay, bisexual or transgender. This hurts the image of Oklahoma City, and we hope you’ll take this first step.

“There has been communication about this not 'having teeth.' But we do believe that a Human Rights Commission is absolutely necessary. Protections should be there for employment and human space. There are teeth in the amendment,” he stressed.

Supporting the amendment was former Oklahoma City police officer, Paula Sophia Schonauer. She said in a powerful statement that it has been determined that “gender identity or the word ‘transgender’ was not included in the protected class. Since it was not included, it was found not to be a problem [by those who overlook transgender issues].

“But I was almost fired,” she continued. “The progress we have seen is that gender identity was included, but the lack of specific language and administration change could turn against us and render us invisible. We want the basics: housing and employment. We are talented, intelligent, law abiding citizens. I want this city to make a strong statement about full inclusion of gender identity.”

Next to speak was Amanda McClain Snipes, Oklahoma City native who married her wife a few months ago. Although she wants to make a home in Oklahoma City for herself and her new wife, she has been afraid to house hunt. “When you live in a community that doesn’t outright accept, you want to be invisible. Today is the day we can turn the page. Today is the day we can say, ‘Yes you are worthy, yes you are home.’”

Mark Henrickson, a lawyer in Oklahoma City, spoke to congratulate Shadid for proposing the progressive amendment. “This will be the first step in regulating a transaction that hasn’t been included. It’s a shame that in 2016 we don’t have specific laws for protection – it creates otherness,” he explained.

“Some concern is this ordinance doesn’t have adequate enforcement measurements…[but] this would be a step in the right direction; a mechanism that would allow protection.”

He went on to say that although gay marriage has been passed, “Some of us are afraid to get married because we are scared to be evicted or fired.”

Shadid finally spoke. “Once you become more of an outlier, you have to have a reason why you won’t implement this. What is your reason for not doing it?” he asked. “If you incorporate sexual orientation and gender identity, the sex can encompass all of sexual orientation and gender identity. It can incorporate everything under that umbrella. I don’t think this and the Human Rights Commission have to be considered at this same time, but it should be considered.”

Council members agreed that they have not had the time to investigate the issue themselves. Although there was agreement that they should stop housing discrimination, they could not come to a conclusion regarding whether there have been documented problems regarding this issue. Plus, when you have a conversation to create a protected class, you run into issues with the First Amendment.

Mark K. Stonecipher concluded that there needs to be more debate on the subject considering its last minute proposition.

Pete White, Council member, said that public opinion has gotten to a point where no one should discriminate or be discriminated against.

After much conversation and debate between White and Stonecipher, and David Greenwell’s agreement that all discrimination should come to a halt, the discussion of expanding the definition of sexual orientation and gender identity came to a close.

In their final statements, White said, “This boils down to the way people look at the Constitution. Some look at it as a set of words designed to protect the discriminator, and others as a way to prevent discrimination. If this challenges their religious beliefs, they need to work on their marriage.” He laughed.

Greenwell said, “Everybody is entitled to their unalienable Constitutional rights.”

“My position is simple: it’s important when people in our community, especially high risk like transgender people, need to remember that this ordinance doesn’t carry any enforcement ability. So now that this language is on the books, there is no way to stand up against it. Nothing is different today that was true yesterday. That’s the fact of it.

"The reality is the conversation that took place today shows there is support for a Human Rights Commission and that a Human Rights Commission has the potential of addressing all kinds of inequalities all across the board from all angles, all minority groups, some positive; but our community must understand that what happened today was largely symbolic, which is great, but does not have any enforcement ability at all. I’m pleased with the outcome, but it was a terrible risk.”