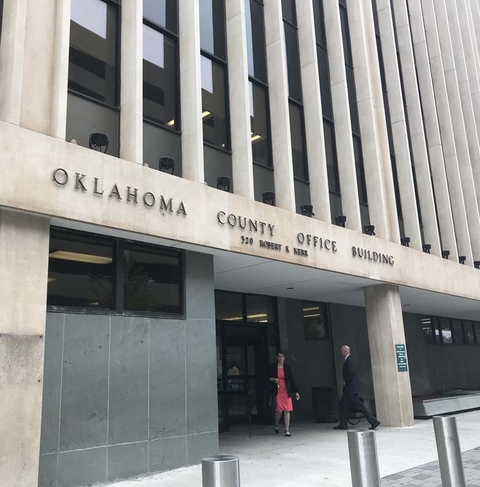 Today, in the Oklahoma 7th District courtroom of Judge Amy Palumbo, Brandon Michael Tyson was sentenced to life without parole for the November 27, 2017 murder of Brooklyn BreYanna Stevenson.

Read here for the background on this tragic death:
Trans woman found dead in OKC hotel room
Arrest made in OKC trans murder

“Brooklyn left a positive impact on the community as evidenced by all the family and friends she has here today,” said Assistant District Attorney M. McMahan.

Today, the victim’s family and friends had the opportunity to confront Brooklyn’s killer.

“There are no adequate words to express the loss of my child,” said Vivian Stevenson, mother of Brooklyn. “We lost a big part of ourselves when Brooklyn was suddenly and violently taken from us.

“When I last spoke with her she said, ‘See you tomorrow, momma.’ That tomorrow never came.”

Since the murder, Stevenson and the rest of Brooklyn’s friends and family have gone through numerous holidays, birthdays, weddings, special occasions and more without their beloved Brooklyn.

“Brooklyn is missed every single day,” said Stevenson. “Lucky for me she was such a diva and took so many pictures. I go to her [Facebook] page to be near her. But I can’t touch her; I can’t see her there.”

Stevenson said she did not want the defendant to get the death penalty.

“But I do want to see him get life without parole because he has proven he has no regard for life.”

“We did everything together. Being her best friend was the best thing that ever happened to me. She always made me feel safe.”

McDaniel went on to talk about the impact Brooklyn’s death has had on her family, particularly her child who was Brooklyn’ Godchild.

The third person to speak on behalf of Brooklyn was her sister, Leslie Stevenson. “Words do not express what I am going through,” she began adding that she normally does not talk much, but this is her chance.

“There is not a moment that goes by I do not think of Brooklyn. When I heard the news, my boyfriend had come to pick me up at work, and I thought “this must be serious.’

“When I heard “they found Brooklyn dead this morning,’ my whole world broke down at that moment,” she said. “Then, when I first saw the news, they had dead-named her, and we experienced more tragedy when we heard this.

“Brooklyn was not only my sister; she was my best friend. She was the fun one to be around.

“I truly hope Tyson, filled with selfish actions of taking another life, spends the rest of his life in prison where he belongs.”

Judge Amy Palumbo spoke, saying, “The evidence supports that the defendant was there to sell drugs to someone and met Brooklyn while there. The defendant is a member of the Arian White Brotherhood. He has said he went to the victim’s [hotel] room and received oral sex from Brooklyn. Then he shot her two times in the chest.”

At one point, Tyson had said the two got into an altercation, but according to the judge, the evidence did not support that claim.

Tyson’s attorney, Gary Higginbottom asked for the court’s mercy in sentencing, saying his client is remorseful for what he has done.

But mercy was not delivered by Judge Palumbo.

“He has been in trouble since his teens, from burglary to felony larceny, and there were three felonies pending when he was in possession of a firearm after being convicted of felonies.”

The judge said Tyson had three other unresolved felony charges when he murdered Brooklyn, and while incarcerated, he has been charged with holding contraband.

“His crimes have become more severe. Even being in jail has not stopped him from committing crime.

“The only option is for him to have a sentence of life without parole.”

Holding hand, Brooklyn’s family squeezed each other tight. Filled with tears, they left the courtroom.