My life in prison 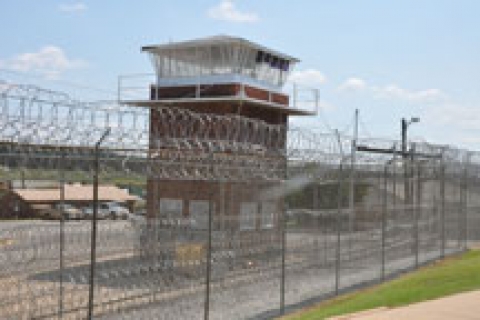 The December 14, 1984 bank robbery in Geronimo, OK was one of the bloodiest bank robberies
in Oklahoma history, and created a great deal of anger and lust for vengeance in mostly rural
Comanche County, located in southwestern Oklahoma. It was the 1980’s and homosexuality, by
virtue of Oklahoma’s sodomy laws written specifically for same sex couples, was illegal.

The district attorney mentioned to the jury several times that Jay Neill and Robert Grady Johnson
were homosexual lovers as well as killers, as if in an attempt to provoke them to convict the two
for being gay, if nothing else. Neill and Johnson were convicted, and sentenced to death.

Robby describes his experience after his conviction: “When I got there (to death row) July 11,
1985, I was brought to D-14. It was a single cell; a metal bed with a mattress, toilet with a sink on
top, and a metal table with a round seat.” About a week before Christmas, 1991, he was
transferred to H block. “I was the first inmate to enter H block. It’s a building that is underground.
It would drive anyone nuts.

“The cell house was the best place to be. It was more open than closed in.” The openness allowed
inmates to talk and play board games. “It took my mind away from the wrong I was experiencing
and the possibility of being executed.

“I had to find a piece of mind, a place where Robby was….I had to keep me and not give that up
The judicial system took my physical freedom, but I made a determination that I would never
allow my real freedom, my mind, to be taken.”

After his conviction was appealed, Johnson was granted a new trial, separate from Neill. In that
trial, in 1993, the prosecutor again missed no opportunity to point out to the jury that Robby was
not only a murderer, but that he and Neill were homosexual lovers.

He was convicted again. In an error, his lawyer was never notified (as required by law) that the
court reporter had delivered the trial transcripts to the Oklahoma Court of Criminal Appeals. As a
result, the OCCA ruled that Johnson had missed his deadline and refused to hear his appeal.

Johnson’s attorney filed a motion to appeal that ruling, but it was rejected by the court, starting a
nine year battle to have his appeal heard. Finally, in 2002 the 10th District Federal Court granted a
writ of Habeas Corpus, stating basically that both courts were in clear error in preventing
Johnson’s appeal to be heard. It gave them 90 days to afford him counsel and hear the appeal, or
release him.

The OCCA heard the appeal and again ruled against Johnson. The ruling was appealed to the
Federal 10th District Court. This court ruled that Robert Grady Johnson was fairly convicted of
four murders, "despite the lack of eyewitness testimony and lack of physical evidence." What?

One other fact addressed by the Federal court was that the district attorney misapplied Oklahoma
law regarding felony murder in effect in 1984. That law required the defendant to be physically
present at the scene of the crime to be convicted of murder.

The law in place at the time of the second trial was different in that the defendant did not have to
be physically present. This issue was brought up in the application for the Writ of Habeas Corpus,
but was dismissed by the OCCA. Applying the correct version of the law, Johnson could not have
been found guilty of felony murder. He could possibly have been found guilty of being an
accomplice or some lesser charge which would have brought a much lighter sentence.

The actions of the district attorney, district judge and the OCCA appear to be less about seeking
justice than playing to the conservative population of Oklahoma. The defendants were gay and
the other parties are elected officials of the state. It is not a good combination for justice in
Oklahoma. One has to wonder the outcome if the couple were heterosexual.

The normal day for Robby Johnson these days begins with breakfast at 6:00 am. Then off to
work. On Feb. 8th, 2014, Robby wrote, “I try to work as hard as I can whenever [Deputy Warden
Tommy Sharp] needs something done. In here, work is work. I try to stay busy and let the days
pass as quickly as possible.

“Usually, after working all day, I come in, eat dinner, shower and watch television. Bedtime is
10:00 pm or after the weather.” The next day is a repeat of the last.

In our interview with Robby at Mack Alford Correctional Center in Stringtown, Robby was very
upbeat and making the best of his situation. He believes that somehow the justice system will
recognize the errors made in his case and someday he will be free. In the meantime, he will not
let his situation get the best of him and continues to be hopeful. In his letters to The Gayly he
reminisces about his life before the bank robbery.

“I still have all my memories of growing up. On the one hand, I had a terrible stepdad who
terrorized us all, yet I had a mom, grandma, and two sisters who made up for all that. I had a great
childhood, the best one could ever have. My sister, Rhonda was my best friend. She looked after
me when others made fun of me.

After high school, which was “the best for me,” Robby moved to Norman. “My young (22 y/o)
ass didn’t grasp the meaning of life and growing up. I thought it was a party and took nothing
serious, even relationships. I was just in it with Jay because it was fun. I never knew he would
become obsessed and murderous.

“As the months grew on and his behavior grew worse I assumed at some point we’d part. I’d be
fine as always, not really caring about him or his feelings, if he ever had any. I’m not sure a
disturbed person can have them. Even after taking me to where I am now he never felt bad. I
don’t know if he felt bad when he confessed that I wasn’t involved in any part of the robbery
prior to his execution. He probably realized he needed to be as truthful and sympathetic as
possible to make some sort of redemption. I hope he was serious in his apology.”

According to Johnson, a video of this confession was made by Jay Neill’s attorney, Scott Braden.
According to Johnson, he attorney, Mark Henricksen told him about the tape. Neill’s verbal
confession was mentioned in the Appellate Court records, but was completely dismissed by the
court as being unreliable. The Gayly is actively seeking this tape, but has been unable to locate
Mr. Braden.

In the meantime, Robby continues to carry on his fight for freedom. He just filed a
post-conviction appeal with the OCCA in December, 2013 in what might be his last chance to
have his conviction overturned. This may prove to be a difficult task in this state where a majority
of the people still believes that homosexuality is a choice punishable by eternal damnation and
open discrimination against gays and lesbians is not only legal and allowed, but encouraged by
the state House, state Senate and the Governor’s office. However, Robert Grady Johnson is a very
formidable opponent and is unlikely to go quietly into the night.