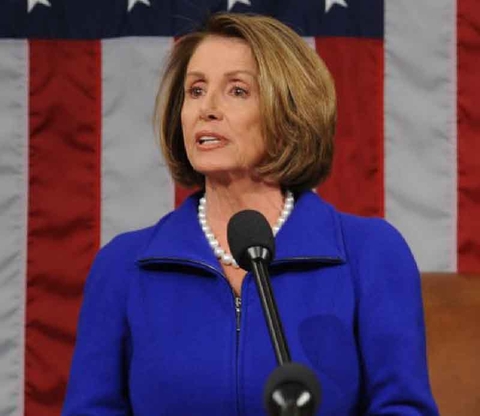 Rep. Nancy Pelosi (D-CA) was the first woman Speaker of the House. She expects to return to that post in January. Official photo.

With House leadership races and an election to determine who will be the next speaker of the House of Representatives on the horizon, Nancy Pelosi is calling on House Democrats to "be unified."

The longtime House Democratic leader is currently running unopposed in her bid for speaker, but her call for unity comes as a small, but vocal, group of House Democrats is working to try to deny her the votes to reclaim the title she held the last time the party had a majority in the lower chamber.

"In the next few weeks, we need to be unified, find common ground with Republicans in our legislative engagements, but stand our ground when we must," Pelosi wrote in a letter to Democratic colleagues Monday.

The actual speaker election won't take place until January when the new Congress comes into session and Pelosi allies insist she has the support needed to prevail. Pelosi herself has said she is "100%" confident that she will be the next speaker.

But Pelosi detractors have remained active in plotting against her bid following the 2018 midterm elections in which Democrats took back the House. House Democrats will determine who their nominee for the speaker's race will be in an election the week after Thanksgiving.

Pelosi's message to colleagues to "find common ground with Republicans ... but stand our ground when we must," could also set the tone for how Democrats will approach the lame duck session of Congress that starts when lawmakers return to Washington on Tuesday.

A showdown over spending looms as Congress rapidly approaches a December 7 deadline to fund portions of the government. One contentious issue expected to come up during the spending fight is how much Congress will dole out to fund President Donald Trump's signature campaign promise of a border wall.

In addition to Pelosi's speaker bid, other Democrats are vying for House Democratic leadership positions lower in the hierarchy.

The current No. 2 House Democrat, Rep. Steny Hoyer of Maryland, is looking to become the House Majority Leader in the next Congress, while the current No. 3 Democrat, Rep. James Clyburn of South Carolina, wants to become House Majority Whip. Clyburn faces a challenger, however, in Rep. Diana DeGette of Colorado, currently a member of the Democratic whip team serving as a chief deputy whip.

Rep. Ben Ray Luján of New Mexico, the chair of the House Democratic campaign arm, is running for the position of assistant Democratic leader against Rep. David Cicilline of Rhode Island.

Rep. Hakeem Jeffries of New York and Rep. Barbara Lee of California, both members of the Congressional Black Caucus, are competing for the spot of chair of the House Democratic Caucus.