NATO summit: Trump accuses Germany of being a 'captive of Russia' 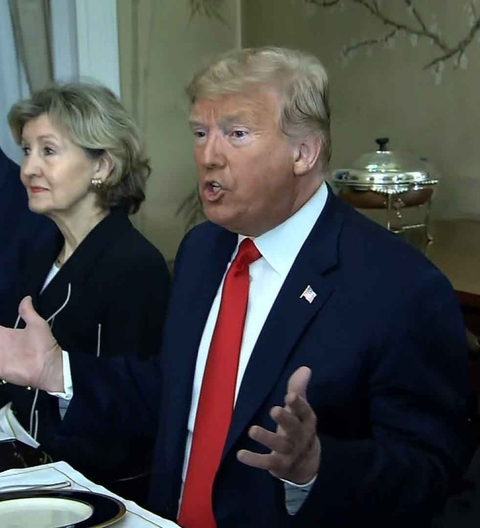 President Donald Trump on Wednesday accused fellow NATO ally Germany of being beholden to Russia because it buys energy from Moscow, in pointed remarks ahead of a summit of the military alliance in Brussels.

"Germany is a captive of Russia," Trump said at a meeting with NATO Secretary General Jens Stoltenberg, his first since arriving in the Belgian capital. "It's very inappropriate."

Trump went on to complain that the United States is expected to "defend them against Russia," despite Germany making "billions of dollars" in energy payments to Moscow.

"I think it's something that NATO has to look at," Trump said. "Germany is totally controlled by Russia."

Trump's comments were a remarkable criticism for a US president to make about a close US ally and is likely to increase tensions between the US and its European allies. Indeed, while Trump singled out Germany, he also noted that "numerous" NATO countries have made pipeline deals with Russia.

Trump's comments drew forceful pushback from the typically staid NATO Secretary General Jens Stoltenberg, who went back and forth with Trump over the importance of preserving the alliance.

"The strength of NATO is that despite these differences, we have always been able to unite around our core task to protect and defend each other because we understand that we are stronger together than apart," Stoltenberg told Trump.

"Because we understand that when we stand together also in dealing with Russia, we are stronger," Stoltenberg said.

Trump rejected Stoltenberg's argument, saying Germany is "making Russia richer" and again repeating his claim that Germany "is captive to Russia," before White House officials intervened to usher reporters out of the room.

German Defense Minister Ursula von der Leyen preemptively rebuffed concerns about any German "dependency" on Russia in a Tuesday interview with CNN's Christiane Amanpour, saying Germany has "a very diverse mix of energy supplies." Leyen also noted that Merkel has been at the forefront of diplomatic efforts to curb Russian aggression in Ukraine.

Germany imports roughly 94% of its natural gas. In 2015, 35% of imported gas came from Russia, while 34% was sourced from Norway and 29% from the Netherlands. But German imports of Russian gas have risen in recent years, according to experts.

Most Russian gas is delivered to Europe via a pipeline that runs through Ukraine, an arrangement that is seen as risky given geopolitical tensions in the region.

Plans for a new gas pipeline that would bypass Ukraine, the Nord Stream 2, have been in the works for years, but the project remains controversial. Germany argues that the new pipeline would provide more energy security.