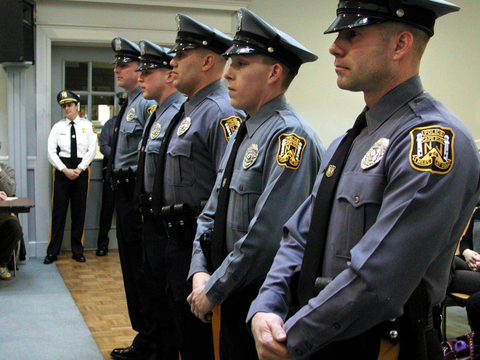 Steven Pascal and his fellow officers are introduced to the public before Cape May council in 2002. (Dan Drake/File Photo)

CAPE MAY, N.J. (AP) — Officials in a New Jersey shore town have agreed to pay a proposed $369,000 settlement with a gay former police officer who filed a discrimination lawsuit.

The Press of Atlantic City reports the Cape May City Council decided on Tuesday night to approve the payment to Steven Pascal.

Pascal claimed in his 2013 lawsuit that the police department created a hostile, anti-gay work environment and wrongly fired him.

Most of the settlement will be paid by the city's insurer. City officials previously planned to pay $50,000, but said in a statement Wednesday the joint insurance fund may reduce the city's contribution.

No one admits wrongdoing under the settlement. The allegations can't be brought back to court.

Information from: The Press of Atlantic City (N.J.), http://www.pressofatlanticcity.com