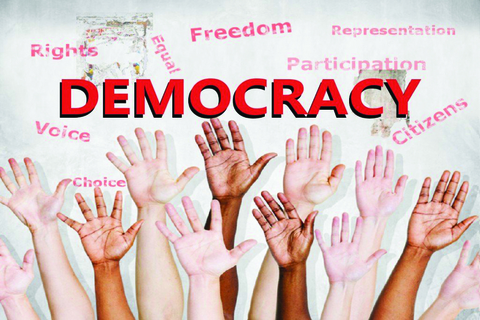 I know my successes in resolutions is mixed. I'm still dedicating myself to the tradition of continually working to better myself, my community and the world around me by setting a new goal to mark the New Year.

This year when you are considering your resolution, I challenge you to consider one that involves not just yourself, but the community and world around you. I have a specific option I'd like to lobby you for, however. It’s a big issue I think we can all get behind…democracy.

Yeah, democracy is what I want you to consider as your New Year's resolution. And in a democracy voting is just the first step.

Yes, we must vote. More importantly, we must participate in other ways. We must engage ourselves by staying informed about the actions of our government and the individuals who embody it. We must engage our friends and family in discussions of this information and how you agree or disagree with the way the government operates in your name.

Government isn't an entity that exists separate from us as individuals. It is the combined power of all individual citizens of that country. When only 58 percent of the eligible voting population shows up to vote, we have a government that doesn't represent 42 percent of the population. These are voices that go unheard when it comes to policies which help these very people.

If good, kindhearted people are so disgusted with the system, they are more likely to become disenfranchised and more likely to be uninterested. When they no longer participate, their influence will not have an impact in the system.

“Evil begets evil.” Negative feedback of a dysfunctional government perpetuates itself if never brought to bear by the weight of democracy with the full participation of its populace.

I implore you to resolve this year to become more active in the government that impacts all our lives and can be impacted by anyone's influence.

Specifically, I have three particular tasks I'd like you to achieve over the course of the next year. First, engage yourself in the pursuit of unbiased knowledge. There are many sources of information that are there solely to inform not to sensationalize an issue. My favorite is Public Broadcasting Stations (PBS).

Second, engage your friend's, whether or not they already engaged. Form a group of friends who care about similar issues and make a commitment to each other to be more active in community events, charities, environmental issues, political participation and other group commonalities. Band together with these friends and collectively exert your positive influence over the community, government and world.

Third, and most important, preach the gospel of democracy to anyone who thinks they don't have an influence or to those that think politics all so very distasteful. Remind these people it is this way because they don't participate, rather than the other way around.

All too often I hear that it will take a violent revolution for the entrenched powers to lose their influence. I posit it won't take a revolution of blood if we can just muster up a revolution of willpower amongst the silent, unintentional proponents of the status quo.