NFL star has a message for many of you in the discussion on racial injustice: 'You aren't listening' 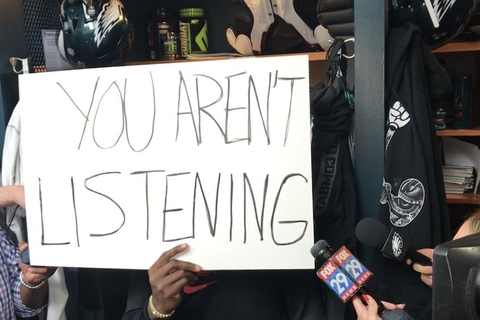 (CNN) -- After Wednesday's Eagles practice, reporters surrounded Malcolm Jenkins at his locker, hoping the normally outspoken captain would talk about the Super Bowl champions being denied a celebratory trip to the White House.

Jenkins wanted to be heard but effected his message by staying silent.

The NFL star safety had decided on his words beforehand, using a black magic marker to put his thoughts on white poster board.

He ignored the reporters' queries, instead switching the cards as the cameras focused on them and he focused on getting the conversation back to where it started -- on social and racial injustice.

"What aren't we listening to?" a journalist asked. Jenkins let his cards speak.

The second one gave the number of people shot and killed by police this year, and the sign pointed to the glaring statistical difference of African-American men in the US population and the percentage of people killed by police who are black males.

"More than 60% of people in prison are people of color"

Jenkins' message came a day after the White House and President Donald Trump held a Celebration of America event instead of honoring the Super Bowl winners from Philadelphia. Trump claims the Eagles disagreed with his position on standing for the National Anthem before the game, but during the 2017 regular season and playoffs, Eagles players always stood during The Star-Spangled Banner.

But around the league there were players who knelt in silent protest of the treatment of African-Americans by police, and Trump blasted them as unpatriotic.

In another statement from the White House, press secretary Sarah Sanders said the team attempted to renegotiate a visit, wasn't negotiating in good faith and the vast majority of the team had abandoned fans who wanted to attend the event.

Defensive end Chris Long shook his head and said, "We love our fans. We have the best fans in the world."

Long was one of the players who wasn't going to visit the White House (and didn't go in 2017 when he was with the Patriots), making his displeasure with the President clear for several years.

Jenkins had said the day after the Super Bowl he wouldn't go to the White House.

Long applauded Jenkins, saying his Pro Bowl teammate does "an tremendous job of advocating for issues like social justice and criminal justice reform."

Long, winner of the NFL Players Association community MVP, said sometimes people who are affected by the issues or don't know much about the subject, they don't want to hear about it.

"I think that's what Malcolm might be getting at, there is a lack of listening when it comes to that," he said.

Some of Jenkins' other cards included the number of African-Americans in the prison population, the number of juveniles who are arrested each year, one that mentioned the $1 million former San Francisco 49ers quarterback Colin Kaepernick gave to charities, and the fact that Long donated his salary last season to education programs.

Eagles coach Doug Pederson spent several of the first minutes of his morning news conference being asked about the Trump disinvitation. He seemed eager to move away from non-football issues.

When asked about the team being accused of a political stunt, Pederson said he wouldn't discuss it.