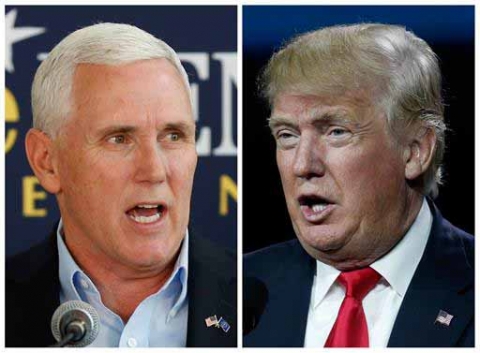 INDIANAPOLIS (AP) — The coming days could see a major shake-up in Indiana politics as Donald Trump considers Indiana Gov. Mike Pence among others as his Republican vice presidential choice.

Pence is set to attend a campaign fundraising event with the New York billionaire in Indianapolis on Tuesday — just six days before the Republican national convention in Cleveland. The Trump campaign also has scheduled a rally for Tuesday evening in suburban Indianapolis.

If Trump picks Pence as his running mate, it would scramble the Indiana governor's race as Pence could not run for both offices under state law and would have to drop his re-election campaign by noon Friday.

Pence at one point stoked talk of his own presidential run in 2016. In May, he tepidly endorsed U.S. Sen. Ted Cruz of Texas before Indiana's presidential primary, but praised Trump effusively and has since backed Trump for offering a chance "to take a new direction" in Washington.

"The kind of leadership that I truly do believe, to borrow a phrase, will make America great again," Pence said during a Thursday campaign stop.

Trump doesn't know Pence as well as some of the other candidates said to be under consideration, such as former House Speaker Newt Gingrich, New Jersey Gov. Chris Christie and U.S. Sen. Jeff Sessions of Alabama. U.S. Sen. Joni Ernst of Iowa was viewed as a potential running mate, but suggested in an interview with Politico that Trump should pick Pence instead.

Pence could provide Trump with Washington experience from his 12 years in Congress before being elected governor in 2012. Pence spent time as the third-ranking House Republican in charge of crafting and communicating the party's message.

Pence also is a longtime favorite of social conservatives, many of whom have been skeptical of Trump. He saw his standing slide amid last year's national uproar over Indiana's religious objections law that critics feared would allow discrimination against gays and lesbians.

Marc Short, a former Pence aide who worked on Marco Rubio's presidential campaign, said "There's some questions about whether or not the current nominee is on-message. Mike is good at it."

"When you're chairman of House Republican Conference, your job is to keep Republicans on-message," Short said. "You're talking about 180 House members who have their own very strong opinions."

Trump and Pence are both expected at a Tuesday evening campaign fundraiser in downtown Indianapolis, where requested contributions range from $2,700 a person to $250,000 per couple. That will be followed by a rally at the Grand Park Events Center in suburban Westfield, which has an attendance capacity of 15,000.

The events come just before the noon Friday deadline set by state law for Pence to withdraw as a candidate for governor and allow the 24-member Republican state committee to select a replacement for the November ballot. State law gives party officials 30 days to choose a new candidate.

While many establishment Republicans plan to avoid the GOP convention that starts July 18 in Cleveland, Pence says he's eager to participate.

"I'm going to Cleveland and if they want me to speak, I'll be happy to speak," Pence said.

A summer time withdrawal by Pence would be a first in a gubernatorial race in modern Indiana history and could provide an opening for Democrats. Pence has been locked in a contentious campaign against Democratic former House Speaker John Gregg, whom he narrowly defeated in 2012.

Holcomb, a former state Republican chairman and top aide to former Gov. Mitch Daniels, was picked by Pence as his running mate in March after Sue Ellspermann stepped down from the lieutenant governor post. Holcomb is well connected with GOP leaders, but has never won elected office and had little fundraising success during nearly a year running for the party's U.S. Senate nomination.

Bosma has long held gubernatorial ambitions and told CNN that he would be the best candidate to build on the state's economic success. Rokita points to his two statewide victories in elections for secretary of state before his election to Congress.

The campaign has shaped up as a referendum on Pence's four years in office, but Gregg maintains that a new GOP candidate wouldn't change his focus.

"The issues are the same whether it's Mike Pence or someone else," he said. "It's still the same message. It's still about jobs."