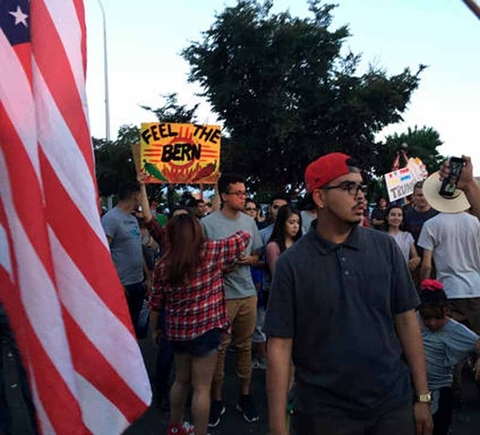 There are deep differences in the way Americans of all stripes view patriotic symbols in a country founded on the freedom to protest. AP Photo, Russell Contreras.

San Francisco (AP) — The oldest Latino civil rights group in the United States opens every meeting with the Pledge of Allegiance, a tradition resulting from a long fight to prove Hispanics belong in this country.

In the San Francisco Bay Area, a white father of two says he would never require his young daughters to recite the pledge to show their patriotism.

And in North Dakota, Native American protesters whose ancestors were here long before there was a United States waved American flags as they fought a proposed pipeline near sacred tribal land. Some demonstrators flew the flag upside down as a distress symbol.

San Francisco 49ers quarterback Colin Kaepernick's refusal to stand during "The Star-Spangled Banner" in protest against racial oppression and police brutality has brought to light deep and sometimes surprising differences in the way Americans view the flag, the national anthem and the pledge.

The symbols, people say, inspire skepticism and heartbreak, pride and joy, sometimes all at once in the same person. Some minorities, in particular, have conflicted feelings about symbols honoring a country that has not always treated all people equally.

"The flag is important to us because we have so many relatives in the military," said Justin Poor Bear, a 38-year-old member of the Oglala Lakota tribe from Allen, South Dakota. "There is also a lot of pain."

Following Kaepernick's example, pro athletes and high school students across the country are taking a knee or linking arms during the national anthem before sporting events.

The protests have raised questions of who gets to be called a patriot.

Jason Pontius, a 46-year-old white resident of Alameda, California, said the U.S. of all countries should realize that blind devotion is not the American way. Sometimes when he drops off his second-grader at school, he sticks around while she recites the Pledge of Allegiance with her class. But he doesn't join in.

"What makes America great," he said, "is that people have always challenged the idea of what America stands for."

Yet there are organizations that embrace the flag precisely as a way to declare that their members, too, are Americans.

The League of United Latin American Citizens — the nation's oldest Latino civil rights group, founded in Texas by World War I veterans — has historically opened all its meetings with the pledge and a prayer similar to one George Washington is said to have recited.

Dennis W. Montoya, the league's state director in New Mexico, said the group's emphasis on American pride is connected with a long fight by Latinos to prove they belong in this country.

"If someone doesn't stand for the pledge at one of our meetings, that person will probably be kicked out," Montoya said. "It's disrespecting LULAC's rituals and traditions."

African-Americans have been moved to create symbols that better reflect their history.

The national anthem, for example, was written by a slave owner and contains a painful reference to slavery in its little-known third stanza. The NAACP dubbed "Lift Ev'ry Voice and Sing" the black national anthem in 1919.

The hymn is a staple of African American singers and is so important that the clergy member who gave the benediction at President Barack Obama's 2009 inauguration opened with lines from the song.

After Kaepernick started his protest in August, C.C. Washington of Waco, Texas, read all the stanzas of "The Star-Spangled Banner," including the one that refers derisively to slaves who fought for the British in exchange for their freedom.

"All this time, I've been posting on Facebook: Respect our flag, respect our national anthem. Now it's totally different," she said, choking up. "I'll stand out of respect for the people standing next to me, not because I believe it."

Poor Bear said he started looking at the anthem differently after he took a group of Oglala Lakota students to a minor-league hockey game last year. A man yelled slurs and sprayed the children with beer, incensed that one of them did not stand for the national anthem, Poor Bear said. The student had been putting batteries into a camera.

"So I still stand for the national anthem," Poor Bear said. "But I no longer put my hand over my heart."

Linda Tamura, a retired professor of education in Portland, Oregon, has no personal objections to the anthem or the flag, even though her family was among tens of thousands of Japanese-Americans put in internment camps by the U.S. government during World War II.

Her father volunteered for the military, along with her uncle and other Japanese-American men who felt it was their duty. When she looks at the Stars and Stripes, she says, she feels pride, instilled in part by her parents, who "more than anything wanted us to believe in our country."

At the same time, she salutes the growing protest movement and hopes it triggers broader discussions about how to improve relations.