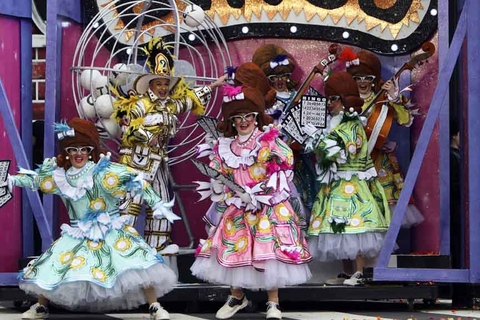 Philadelphia (AP) — Organizers of the Mummers Parade are hopeful that cultural education efforts will help the city's annual New Year's celebration be more respectful and inclusive following a string of racially and ethnically offensive displays.

The initiatives include sensitivity training sessions and online videos that explore issues such as cultural appropriation and privilege, sexual identity and the rules of satire. Mummers' leaders also published an open letter last week condemning "expressions of hate and bigotry."

"We want to make this open for more people," said George Badey, a veteran member of the Fralinger String Band and chairman of Love the Mummers. "The parade needs to evolve and represent the full spectrum of Philadelphians."

The Mummers Parade — a Philadelphia tradition since 1901 — is often likened to New Orleans' Mardi Gras, or Carnival celebrations in the Caribbean and South America. It includes more than 10,000 performers divided into brigades; many wear ornate and expensive costumes, and some clubs create large props to accompany their musical performances. Spectators line the streets, and the parade is broadcast live on TV.

But the revelry has been tarnished in recent years. The 2013 parade included a minstrel theme and Delhi-based call center routine. In 2015, a member of a brigade known as "wenches" carried a sign saying "Wench Lives Matter," a slight to the activist organization Black Lives Matter.

Then in January, one skit mocked transgender celebrity Caitlyn Jenner and another featured participants who painted their faces brown to portray Mexicans.

Mayor Jim Kenney, a city native and proud former Mummer, condemned the performances. In a recent statement, Kenney urged the Mummers to display a more respectful tone that celebrates the group's tradition of satire and pageantry as well as the city's diversity.

"Now, we need all Mummers, not just leadership, to honor that goal because, as we've seen in past years, one bad skit or one bad actor can ruin the reputation of the whole parade and hurt a lot of (Philadelphians)," the statement read.

Kenney has said that the free services the city provides to the Mummers, including sanitation and policing, could be at risk moving forward if there are further culturally offensive incidents.

The sensitivity training sessions are not mandatory, but a voluntary initiative between Mummers and the city. Nellie Fitzpatrick, Philadelphia's LGBT liaison, led the session on homophobia and transphobia, and said much of the response was positive.

"While they might think a skit making fun of Caitlyn Jenner is teasing a celebrity deserving of ridicule, for many people, by attacking her, it is sanctioning and approving a message that making fun of transgender people is an OK thing to do," Fitzpatrick explained. "Some Mummers have reached out and said, 'We didn't know. This was really informative.' That gives me hope that there can be a different experience."

For much of their history, Mummers groups included only white men. Women were allowed just a few decades ago. The tradition is also a family legacy, with many clubs based in south Philadelphia.

The Mummers have struggled to diversify, though the parade did create a division last year specifically for ethnic groups. Two new Hispanic performance groups, a black drill team and the LGBT Miss Fancy Brigade were among the participants.

That division is not returning this year, as organizers hope to incorporate diversity into the existing Mummer divisions.

Steve Coper, a saxophonist who also performs in the Fralinger String Band, said his club has been sensitive to how they represent different groups, citing a Native American theme they adopted in 2007.

"We went into research to make sure it was appropriate and that we were playing songs in the right way," Coper said. "We sought advice from experts. Most of us are aware and most of us want to do all the right things and be very entertaining."

Coper attended trainings on satire and on LGBT issues, and said he found the sessions helpful and necessary.

"Last year, we had some issues ... certain performances and behaviors that were not so hot," he said. "We have a responsibility to do some course corrections. We need to be more inclusive and more aware that these communities exist, that they need to be supported ... We shouldn't denigrate anyone."