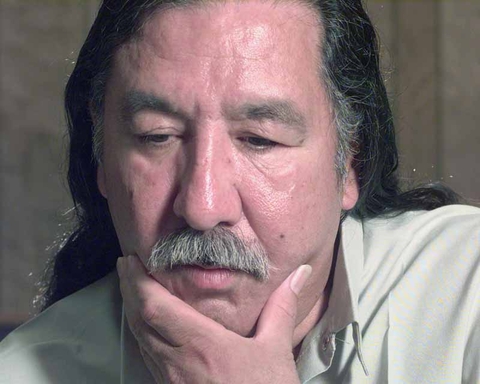 Peltier, 72, is incarcerated at the federal prison is Coleman, Florida. He was active in the American Indian Movement, which grabbed headlines in 1973 when it took over the village of Wounded Knee on the reservation. AP photo by Joe Ledford.

MINNEAPOLIS (AP) — President Barack Obama has denied a clemency request by American Indian activist Leonard Peltier, who has spent most of his life in prison in the killing of two FBI agents in South Dakota in 1975, Peltier's attorney said Thursday.

His attorney, Martin Garbus, said they received a letter from the White House on Wednesday night saying their application to commute his sentence to the 40 years he's already served has been denied.

"He understands that this is a death sentence," Garbus said. "He's in very bad physical condition. (President-elect Donald) Trump is not going to grant him clemency."

Peltier's supporters say he was wrongly convicted in the killings of FBI agents Jack Coler and Ronald Williams during a shootout on the Pine Ridge Indian Reservation. He has exhausted his appeals and his parole requests have been denied. Peltier's supporters consider their clemency request to Obama as their last chance for winning his freedom.

Peltier, 72, is incarcerated at the federal prison is Coleman, Florida. He was active in the American Indian Movement, which grabbed headlines in 1973 when it took over the village of Wounded Knee on the reservation, leading to a 71-day standoff with federal agents. Tensions between AIM and the government remained high for years, providing the backdrop for the fatal confrontation in which both agents were shot in the head at close range.

"The families of the FBI agents who were killed during the 1975 confrontation between the FBI and American Indian Movement (AIM) members have a right to justice, but justice will not be served by Peltier's continued imprisonment," said Margaret Huang, executive director of Amnesty International USA.

But former FBI agent Ed Woods, who has long campaigned to keep Peltier imprisoned, issued a statement thanking the president.

"We are collectively grateful, and humbled, that you chose not to grant commutation to Leonard Peltier," Woods said. "His brutal attack and murder of two young FBI Agents and his remorseless public statements support that justice should continue as he serves the remainder of his lawful conviction and sentence."