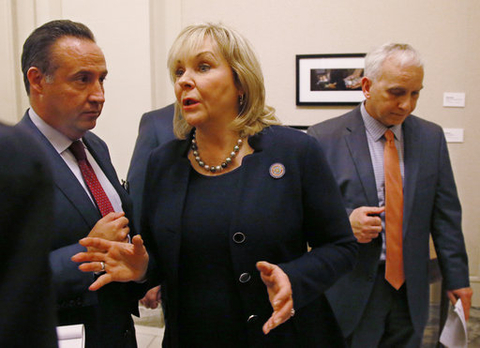 OKLAHOMA CITY (AP) — The Oklahoma Legislature faces political gridlock as lawmakers balk at legislation to raise hundreds of millions of dollars in new revenue and close an $878 million hole in next year's budget to avoid catastrophic cuts to state agencies and services.

Republican Gov. Mary Fallin has called for a "major overhaul" of the state's tax system and says she is willing to veto any budget that does not include new revenue for the fiscal year that begins July 1 — the third consecutive year the state has faced a budget shortfall.

"We have a crisis. We have an emergency. We need to deal with it now," Fallin said during a news conference on Wednesday, barely three weeks before lawmakers are constitutionally required to adjourn on May 26.

"It requires leadership and courage to provide solutions," the governor said.

So far, lawmakers have supported adjusting the income tax standard deduction and attaching fees to tickets to professional sporting events to raise relatively small amounts of revenue. Fallin has chided them for failure to act on major legislation to increase the state fuel and cigarette taxes — proposals she supports.

GOP leaders say closing the budget gap depends largely on passage of legislation to increase the state cigarette and fuel taxes. The bill was scheduled for a vote in the House last week but was laid over due to concerns it does not have enough votes to pass in the Republican-dominated chamber.

As a revenue-raising measure, the bill requires approval by three-fourths of the 101-member House — or 76 members — for it to advance under State Question 640, a citizen-initiated ballot measure adopted in 1992. There are 72 Republican House members and 26 Democrats with three vacancies, meaning House Democrats must support the bill for it to move forward.

But Democrats say it unfairly places the burden of balancing the budget on the backs of working families while corporations and the wealthy continue to enjoy generous production and income tax breaks.

Inman, a candidate for governor next year, says Democrats would consider the measure if Republicans agree to increase the gross production tax on oil and natural gas companies from 2 percent for wells in the first three years of operation to 5 percent — an idea opposed by many GOP lawmakers, including Senate President Pro Tem Mike Schulz of Altus.

"I think it's a disincentive to drilling," said Schulz, adding that the state's economy relies more on drilling activity than it is on the gross production tax. "It appears that there is not enough support for any kind of gross production tax rate increase."

"Scott Inman has not visited my office one time, nor has he picked up the phone to call me about budget negotiations," McCall said. "There's no question that the reluctance and the refusal to compromise on behalf of the Democrats will affect agency budgets."

SHOW ME THE MONEY

The cigarette tax proposal would increase the state tax by $1.50 a pack to about $2.50 and would raise an estimated $250 million in new revenue to support health care in the state.

The measure also raises the state tax on gasoline and diesel fuel equal to 6-cents per gallon with new revenue dedicated to road and bridges.

Oklahoma currently levies excise taxes on gasoline at 16-cents per gallon and diesel at 13-cents, with an additional 1-cent motor fuel assessment fee levied on both. Oklahoma's fuel tax ranks 49th in the nation, while the diesel tax ranks 48th.

While estimates vary, raising the gross production tax on oil and natural gas production to 5 percent would increase revenue by about $150 million a year, according to the state Tax Commission.

House Republicans have vowed to devote any new revenue to raising teacher salaries for the first time since 2008. A $1,000 increase would cost about $53 million a year.

"We have core services that must be funded that are essential to our state," she said.

Officials have said that without additional revenue, state agencies could be asked to trim their budgets between 14 percent and 18 percent, likely forcing state workers to be laid off and services to be reduced or suspended.

Department of Transportation Executive Director Mike Patterson has asked engineers to examine some road and bridge projects that are already underway to determine which can be suspended if money is not available to complete them.

THE CLOCK IS TICKING

With just weeks remaining in the legislative session, Fallin is urging swift action to finalize the state budget.

"We can't be playing games with locking up different groups," Fallin said.

Legislative leaders said they are confident next year's budget will be finalized before lawmakers head home.

"I do think there will be a budget passed," Inman said.

"It's that time of year when people are getting anxious about this process getting done," Schulz said. "This process will get done. I think the odds of a budget going into effect are 100 percent."