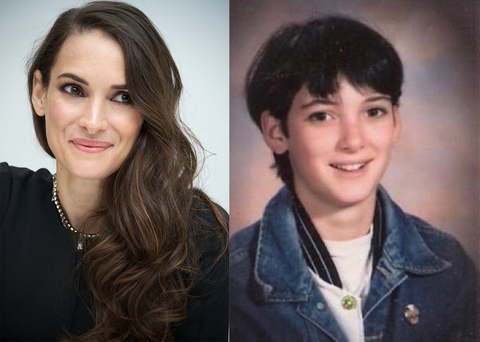 A story about Stranger Things' Winona Ryder’s experience with bullies as a preteen has surfaced.

In the now viral anecdote, Ryder recalls getting revenge on a tormenter.

“I was wearing an old Salvation Army shop boy’s suit,” the actress recalls. “As I went to the bathroom I heard people saying, ‘Hey, f***** [a homophobic slur].’ They slammed my head into a locker. I fell to the ground and they started to kick the s*** out of me. I had to have stitches.” Sickeningly, Ryder was the one who got punished for the horrific act. “The school kicked me out, not the bullies.” 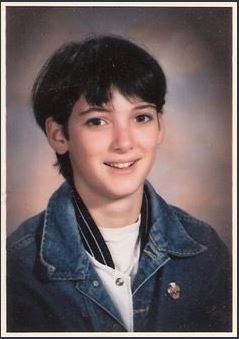 That little girl with her own unique style went on to become a famous actress, who’s at a high point right now thanks to the Netflix hit Stranger Things. That in itself is revenge enough — yet it gets better.

“Years later, I went to a coffee shop and I ran into one of the girls who’d kicked me, and she said, ‘Winona, Winona, can I have your autograph?’ And I said, ‘Do you remember me? Remember in seventh grade you beat up that kid?’ And she said, ‘Kind of.’ And I said, ‘That was me. Go f*** yourself.’” 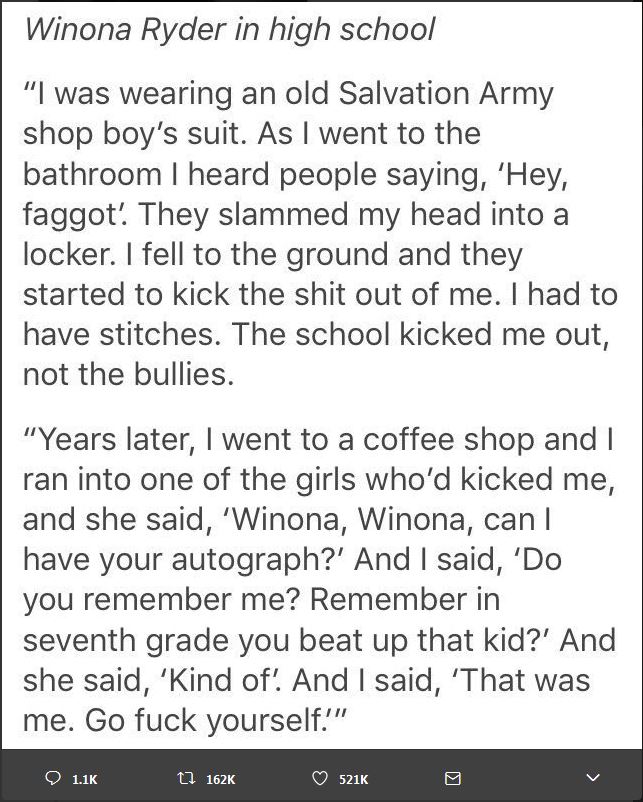 After tracking down the source of the story, it’s detailed in a biography of the actress by Nigel Goodall. According to the book, this happened on her third day of seventh grade at Petaluma’s Kenilworth Junior High. “I think they thought I was a gay boy,” she offered, according to the book. At the time Ryder had cropped hair and wore boys clothing “in the spirit of the old gangster movies that possessed her at the time.” In 2013, the actress mentioned that she got picked on quite often for her short hair, which was inspired by the film Bugsy Malone.

Even after she pointed out to the bullies that she was a girl, they kept harassing her. The book says she ended up with fractured ribs and six stitches in her head. When one of those boys’ girlfriends requested an autograph years later, and Ryder asked her if she remembered the little boy who was beaten up, the girl said, “Oh, that f*****?” Ryder then corrected the woman and refused her an autograph.

Back then Ryder was a target, and at first, her fame only made it worse. Ryder was just 17 when she starred in Beetlejuice as the iconic character of Lydia. “I remember thinking, ‘Ooh, [Beetlejuice] is like the number-one movie. This is going to make things great at school,’” she told Marie Claire UK in October 2017. “But it made things worse. They called me a witch.”